Hasbullah Awang takes on the iGallop

Now, I've watched the World Soccer Series in the US, and I have to say, the commercials there are CRAP and BORING, and I'm not even talking about the pit of manure that is that AIG 'Official sponsors of Manure United" commercial (Which was quite boring, but is made worse by that Manure shield at the end of it).

Anyway, The ones here during the intervals between my second and fourth repeat viewing of the Arg-S&M match, as well as during half-time are so much better.

I've been quite captivated by that music video for Celebrate the Day that they play in between shows, which I think is the most AWESOME music video for a football song I've ever heard. The song is also one of the best Footy songs EVAR (Wel, for one, it doesn't mention anything about three pussycats on a shirt). More on World Cup music in later post.

Anyway, there are a few good ads (which do not include the lame ALi Cafe and Power Root ones, BTW), like the Maxis Germany 1-0 England one, and and.... er.. can't remember anymore.

My favorite is the Hasbullah Awang (that IS him right?) Maxis one. "YA, RIO FERDINAND, MENJADIKAN KEDUDUKANNYA SATU KOSONG." Classic ad, this. Connects with Malaysians (and our inane Malaysia Boleh battle cry), damn funny, and gets the message across at the same time.

But in terms of memorable-ness, nothing can beat this next one I'm about to introduce. In terms of ADS, this World Cup will forever be remember for this the BRILLIANTLY HILARIOUS commercial for THIS product: 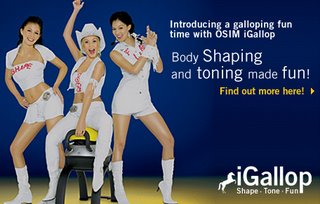 SUCH poise on the ad! Such elegence! Such accurate sharp shooting! and such toned muscles!

Damn, cowboys have all the fun.

She's said everything I wanted to say about it, really. :D
Posted by Unknown at 11:24 am