ESBN: Sco Long, And Thanks For All the Points! 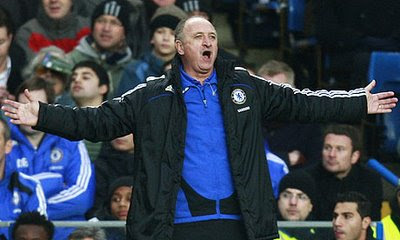 SOME BRIDGE IN LONDON IS FALLING DOWN: Russian footy club Chelski have given up on their dream to win the FIFA World Cup after they sacked World-Cup-Winning manager Luis Phillipa Sorrylar after seven months at Stamford Bridge.

In a statement by the club, some skank named Chelsea said "The board would like to place on record our gratitude for his time as manager."

Eyeris would also like to place on record his gratitude for the generosity Scolari showed Liverpool in gifting them a win at the expense of Chelski's LOOOOOOONG unbeaten home record, a feat that counts as one of the Brazilian's greatest achievements at the club. Other achievements include selling his best left back and the player whom the club's stadium is named after to Manchester Next-Chelsea, and buying a lazy midfielder solely for Decorative purposes.

Rumours that Harry Redknapp was eyeing the vacancy at Stamford Bridge because "If I would leave Spurs for any other club, it would be Chelski", were unfounded at press time.
Posted by Unknown at 9:27 am No comments:

what the fuck are you guys doing?

In wake of the economic problems everywhere, bankers are the new lawyers. Taking the piss out of them seems to be the in thing to do, and I just heard this joke the other day:

As they continue down the road, realisation hits and the inexperienced banker asks, "Hey, I don't get it. We both ate shit, was richer or poorer by $50,000 for a few minutes, but in the end we are back to where we were in the first place. I don't get it. Why did we have to eat all that shit?" "Ah, my young padawan," the experienced banker says, "but did you realise that we were involved in $100,000 worth of trade??"

JUST WHAT THE FUCK IS TOTTENHAM HOTSPURS DOING?!?
Posted by vincent at 9:19 pm No comments: