The Alexi Lalas Award for Worst Hairstyle: My personal favourite would be Bacary Sagna, but I honestly found David James' "fake superman" side-parting back in October truly disturbing. I'm not sure why.

The Juan Veron Award for Biggest Waste of Money: YOU may want Florent Malouda (£13.5 million) to win this, and he probably deserves it, but I would just like to point out that Totty Hotshit paid £16 million for Darren Bent.

The Winston Bogarde Bench Warming Award: I want to say that Andriy Shevchenko's goal-line clearance against ManYoo pretty much saves him from getting this award. He also scored 8 goals in all competitions when he did play. Besides, Jari Litmanen didn't even clock a single minute for Fulham. LOL

The Michael Owen Prize: This award is given to the player who moves to another club in the same season that his former club makes it to the Champions League final. This season, we have two winners - Arjen Robben and Gabriel Heinze. Make sure you play nice and share, now. *Mwahahahahahah*

The "I'm The Man" Trophy: Named after Steven Gerrard and his 60-metre backpass / opponent goal assist calamities, this award is handed to the player who single-handedly decides the result of a match. This season's winner? John Arne Riise, whose diving header not just decided one match, but the away goal pretty much screwed up his team over a two-legged semi-final.

Finally, last but not least, lest we forget...

Cipet-Face of the Year Award

No? You disagree, you say? Too bad, so sad, Hantubola is not a democratic republic!

The Second-Greatest Crybaby in English Football is a Big Man 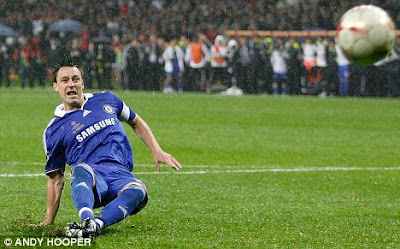 UNITED STATES OF INGERLUND: John Terry proudly proclaimed that he is a 'BIG GAME PLAYER' after not taking any penalties for Ingerlund in their 2-0 win against the United Soccerplayers Association.

Terry also scored a goal in what is the most insignificant international game of the season. Rumours that Terry will now be taking all his future penalties with his head while jumping (to avoid slipping), were unfounded at press time.

After the game, the second-greatest crybaby in English football said, "I've shown that I'm a big man. I take full responsibility for what happened in Moscow but I'm a man for the big games and I've shown that."

He sure didn't seem THAT big in Moscow lor... 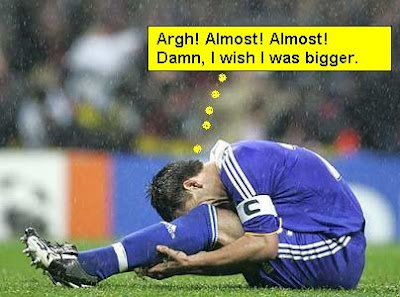 Posted by Unknown at 2:35 pm No comments:

Mr. Beckham kicked in the ball right in the middle of the empty net from his own half and caused the match commentator to ejaculate in his pants because the ball was kicked directly IN THE MIDDLE OF THE GOAL.

It is expected that this wonderfully amazing score goal will spur soccermums throughout the country to push their children to take up this great sport, afterwhich they will realise that it is actually very easy to score an open goal when the keeper is sleeping in the opposition half and the American defenders are too afraid to slide in for a challenge (scared they get sued) and you can afford to let the ball bounce outside the penalty box and roll in.

But still, this is the first time in Soccerball history that such a goal has been kicked in and even the referree went over to Mr Beckham to pat him on the back. This field goal is thought to be the best thing to happen to the Major League Soccer competition since Alexi Lalas' decided to grow his goatee.
Posted by vincent at 10:24 pm No comments:

I want to pity Avram Grant, but there is nothing to pity really. Never mind the Carling Cup final. Never mind having to finish second to ManYoo. Again.

JT should never have taken penalty #5. Never. If it was because Drogba got sent off, there were other players to take that penalty. Kalou was there. Essien was there. Anelka had fresh legs.

Today's "post-mortem finger-pointing article" reckons Anelka was sulking and refused to take penalty #5. Well hey, this is why we have team managers.

The man who takes charge when push comes to shove. The man who will grab a player by the scruff of his neck, hold him up and remind the player who is in charge. The man who will tell any sulking player that for a wage of XX thousand pounds per week, he will do as he's told.

Whatever. We needed something special on Wednesday night; what we got instead was an imitation Pak Lah. Poondeque.

I'm not surprised Grant got sacked actually. After all, Mr A had also sacked the last manager who finished a season with zero trophies. And everyone liked Ranieri, even opposition fans.

Ah well, roll on next season! Our new manager will apparently speak English with a Dutch accent, if you believe all the rumours. I just hope the feller doesn't go and buy Kuyt.

Coming up later this week: Yend of Season Hantubola Avards!
Posted by Unknown at 10:19 pm No comments:

In no particular order:

1) Adrenaline is keeping me awake. I am going to work in 1 hours' time with only 2 hours of sleep under my belt. I contemplated calling in sick, but I am too much of a responsible worker to do that. :P

2) Ronaldo PWNed Essien's ass in the first half.

3) And then went to sleep for the rest of the game.

4) Both players whom the neutrals hate missed their penalty. Actually, make that all three. Le Sulk now has a good reason to sulk.

7) Chelsea are scary next season now that they have perfected the art of DEFLECTION. Now they can even score from a double pinball.

9) United had the better chances but didn't take them.

10) It is beyond my understanding how a legend with 700 and whatever appearances still has not learnt how to use his right foot and makes impossible shots with his left.

11) Nemanja Vidic. Man of the match. The one and only hardman (who doesn't cry like a baby).

12) Quote of the day from Andy Gray: It's approaching added time. I call it Hero Time!

13) Based on TigerJoe's last few smses, he doesn't sound too happy.

Bye bye, more taunting later they publish pictures.
Posted by vincent at 6:00 am No comments: 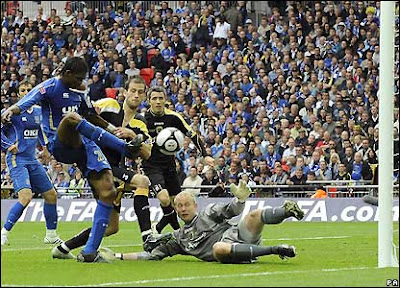 LUNDUN: The final major trophy in English football was won by a club in blue not owned by a Russian and full of almost-retired former Arsenal and Liverpool players and managed by a fugly manager with a hot daughter-in-law; after they beat the offical Premiership Retiree Home club in the final.

In a game that only the most avid Robbie Fowler fan (who would have had to settle for mere glimpses of him on the bench) would have been interested in, Pottymouth won thanks to a Nwankuku Kanu goal (who looked like he was confused as to which direction he should run to to celebrate after scoring it), despite Calamity James having his usual moment of calamity which was only saved by a bloody handball.

It was Pottymouth's first trophy for 69 years. Rumours that James went out looking for hookers after the final to celebrate with some 69 action were unfounded at the time of writing.
Posted by Unknown at 12:11 am No comments:

"I am not a big city man, I need my retreat - that is why I am often in Germany"

Can't stand the noise? Not a city man? Bloody lame weh. Might as well stay in Belarus or don't play football. Still want to play football? Go play in a kampung league lah...there's plenty of peace and tranquility there for you. Macam bagus sangat. Blah lah lu Hleb.
Posted by Naz & S-Kay at 11:04 am No comments:

NEWS! NEWS! READ ALL ABOUT IT!!

London: It was a good day in West London as Fulham secured their Premier League status by beating Potty FC who had their minds pre-occupied with the FA Cup final.

However, their neighbourhood pals, Chelski FC spectacularly and shockingly failed to qualify for next year's Community Shield final after drawing with some crappy team from the Manchester area.

News details to come in shortly as HBBN will keep you updated with words of complaints from some random Chelski fans about how the Russian mob failed to buy Steve Bennett in this game.

In other smaller and less important news, the score at Chelski means that the Great Manchester United FC have won the Premier League. Again. And are now only one title short of "knocking Liverpool off their f**king perch"
Posted by vincent at 12:33 am No comments:

It appears that Mat-TIEW Flamoney decided to ditch us for Milan Retirement Home. Well good luck to him... And judging by the number of players who went through career suicide post-Gunners, he's gonna need all the luck in the world.

But honestly, Flamoney is not indespensible. He had one excellant year with us, the year before that he was a decent emergency left back, and was mediocre in seasons before.

But what pisses me off is that year after year, summer after summer, there's always something on about Arsenal and our best players leaving. And if they're not leaving, we get parasite agents engineering moves for their overpaid clients. How many times have we heard Fabregas to Barca/Real over the years? Its just like Patrick Vieira all over again!!

Its just bloody irritating. If the cost of moving to a new stadium means a lack of trophies and funding for world-class players, then we should have stayed at Highbury. I may have failed 1st year Econs, but I do know a thing or two about Opportunity Cost (Kids, go google it).

I'm going against what I said before, but heck, Russian money sounds good at the moment...
Posted by Naz & S-Kay at 7:06 pm No comments:

Oi Nani, if you somehow manage to find time to surf the Internet and chance upon this fantastic blog (you should have ample time since that ref awarded you a Razzie Red Card), take my advice;

STOP BEING A DUMBASS.
That's all.

I've said it once, before, and I'll say it again. Hyypia has been a real liability to the team this season. Sigh.

Oh well, at least we gave it a real go. And the game was more entertaining than that one-goal bore the night before.

Sighhhhhhh. Looks like I'm going to Moscow purely for the beer then.

Update (12pm):
Ok fine, maybe I'm being too harsh on grampa Hyypia. He really wasn't the main problem in the game, I was upset, ok? Chelski did play well, but I wonder what Skrtel would have been able to do for the rest of the game, considering he had stopped Drogba dead in his tracks before getting injured with an awesome tackle.... SIGH....
Posted by Unknown at 5:06 am No comments: