Hello, and welcome back to Lesson Two of the Hantu Bola Dance Class. Today, we shall learn the next steps in The Croucherena, the intermediate moves that will involve a lot more than just the arms.

Now, before beginning, remember to do the proper warmups. Warming up is essential for the Intermediete steps, because we will now be attempting some very complicated dance moves, some which will floor even the Tango King Maradona himself. 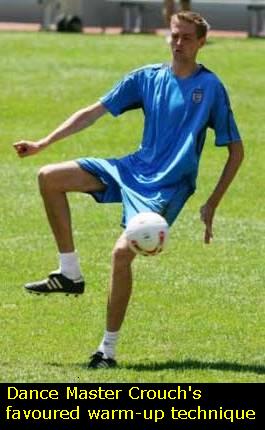 Now that you're nicely warmed-up, we shall begin with the simplest of the intermediate sequences.

While the beginner sequences only involved arm movements, now you see that the dance is beginning to involve the upper body more. Later we shall move on to the leg movements.

For now, here are the upper body movements you must master first:

Notice that the CRAP is still used even in the intermediete sequences. It is essential that you know how to CRAP properly before even attempting to dance the Croucherena.

Now we move on to mixing upper body movements with the arm gestures as well:

Note that although there are two different sequences - a and b - above, you are free to mix and match either sequence to suit your taste and the music.

Very good. Now that you've gotten the hang of it, now comes the complicated part (I hope you've warmed up sufficiently before atempting the following moves): 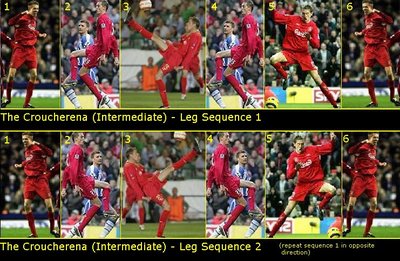 Please do not attempt these moves unless you have mastered the CRAP. It took Dance-Master Crouch more than 20 years to develop this dance (despite having such good touches for a big man) and he eventually developed the CRAP to enable people who do not have his flexibility to do this dance as well. See, our Dance-Master is so considerate.

Previously, only Eric Cantona was able to attempt such high flying kicks. Roy Keane tried, but could unfortunately only kick up to knee height (the other person's knee, that is). Then they tried to CRAP, but were too stuck in manure to even do that. Gary Neville could CRAP pretty well too, but whenever he tried to kick as high as Dance-Master Crouch, his face would go like this: 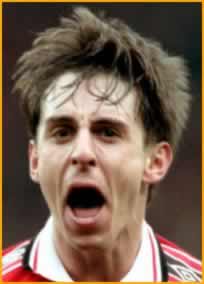 And then he would pengsan terus. Wuss.

So, boys and girls, keep up the practise, make sure you warm up properly before you dance, and learn to CRAP properly, and you will soon be able to dance as well as Dance Master Crouch himself.
Posted by Unknown at 12:19 am