Yeah. England is playing tonight. Hands up all of you who really care.

You see, here at Hantu Bola, we may support English clubs, but heck, when it comes to Internationals, we don't give a damn about England.

But if you insist, here's what I think about the current England team: THEY SUCK.

Please lar, what do you expect to get when you hire a coach who was know for getting lots of draws when he was at Boro?

And admit it, Frank Lampard just does not fit into any other team other than Chelsea. His most useful quality? Just BEING there. Because that gives the opposing midfielders another obstacle to maneuvere past. He can't tackle for shite, he can't attack in a proper attacking midfielder's kind of way. He just... SITS THERE and passes the ball around, doing fuck all, occasionally shooting from distance and hoping to get a deflection.

I'm hoping they get stuffed by Andorra, long shot thought that might be. At least the press backlash will be alot more entertaining than the games themselves...
Posted by Unknown at 3:59 pm No comments:

This is really getting on my nerves already. Some fucker is impersonating me, eyeris and KY (I dunno who else) in the comments section. I really don't know what this guy's problem is. Maybe his mother dropped him on his head when he was a baby. Maybe he's got a tiny dick. Maybe he's so ugly, he can't get chicks so he shags his bedridden granny instead.

On top of that, I can't make my gravatar appear in my comments.

I will not invite people for futsal in the comments section. I don't need to. I can post it here. I can post anything here, including some choice swear words for our special little retard.

May your small lanciao turn green and drop off.

There. That's settled. Moving on.

Errr... Nothing important so far. Anton Ferdinand sucks. Even at U21 level.

Futsal session is ON (unless you see changes here)

Anyway, the other setengah is MIA or will be MIA unless he can spare time away from me during the weekends to blog. LOL. Which I highly doubt so. Imagine hearing him say, "I duwan to watch Arsenal play until the next seasonLAH" so most prolly, no post till next season lah hor.

Naz is somewhere out there. S-Kay is around swamped with stuffs (and wants to castrate a particular Sri Lankan). Chipet.

I want to play tennis.

Take the best orgasm you ever had, multiply it by a thousand and you’re still nowhere near it.

Look what I won off ebay UK. 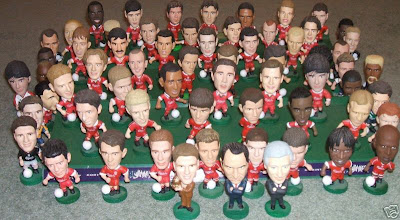 It's a steal innit? How befitting for a fan of the hubcab stealers.

I have a feeling this guy doesn't know his ex is selling his collection. Not my problem.

Question: Wotdafag do I do with Diao and Diouf?
Posted by Lily G at 1:16 pm No comments:

Who Will Win the League? 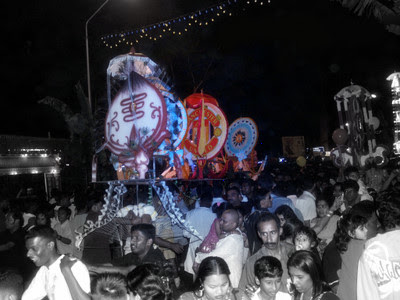 Manchester United States will win the league. They've got divine help leh...
Wahlau. Like that also can ah?
Posted by anttyk at 10:26 pm No comments:

Says it all, really.

They really like their meat over at the Bridge, don't they? 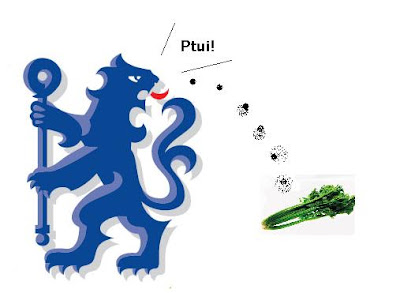 Everything and Nothing. Something, at least.

You'd think a blog with ten contributers would have more regular updates. Watudu, so many of us are missing in action, stuck in deserts/jungles/ neighborly islands/cubicles, too lazy, too busy, or just too plain drunk to post.

Unless you're Din of course. He never gets drunk. But he got lots of love... for Men.United. In a good way, of course. I hope. I think. Oh well, whatever.

Anyway. What's been happening in the EPL lately anyway? Nothing to blog about also. A few managers whining, taking pokes at each other, rumoured to be leaving, almost getting sacked and more whining about not leaving. Players getting injured (Henry's stomach and groin tear sounds positively dreadful); players getting into trouble (Barton, Barto, tsk tsk), and players not signing contracts (Terry and Lampard, where would ya go?)

Oh, and wouldn't it be cool if the first ever FA Cup final at the SPANKING NEW WEMBLEY STADIUM was between.... Blackburn and Watford? AHAHA!

I seriously think that John Terry got jampi by a bomoh hired by Men.Utd, thus transfering all the bad injury karma to the poor guy. Heck, the man has gotten more injuries in one month than the entire Men.United squad the ENTIRE SEASON!

And what the heck was Robbie Fowler thinking, going to the theatre of delusions to play in a bloody testamonial? Oh wait, it's Robbie Fowler. Did he show them his backside again?

Oh, and Champion's League draw. PSV, huh? The last time I was happy at getting 'the weakest team' in the draw, we went out to Benfica in the second round. Bah. Manure's draw looks fun though. Roma huh? Chelsea lagi syiok. Got Valencia. Go Valencia!

Speakign of that, who cares about the EPL? Spain got the most exciting league race in AGES! Sevilla and Barca on 50, Valencia on 47. REal Madrid can go die, play like crap all season still damn ego. Go Valencia!

Last but not least, I'll leave you with the best quotes I've heard this week:

Why wasn't John Arne Riise injured when Bellamy swung that golf club at him?

Because Bellamy was using an Everton Club.

A what club, you say?

A small club.
Posted by Unknown at 7:28 pm No comments: Apara. People hadiahkan you a goal oledi, samore cannot win. Samore let the same guy score against you pulak. Oh well, at least now we got one less team to worry about.

Damn, the Men.United went through. Bah.
Posted by Unknown at 2:59 pm No comments:

Should have Bloody Buried Barca 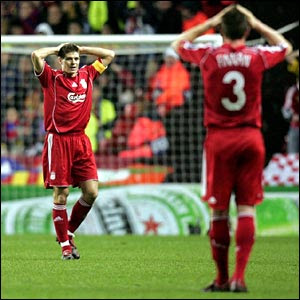 Basket. I wish they would stop making things hard for themselves. They should have bloody BURIED Barca by half-time, instead, they go and hit the crossbar TWICE, and miss THREE TIMES in one attack.

And is it just me, or does bloody Sissoko only know how to tackle, and can't pass the ball for shite? And Crouch still can't shoot.

Lucky they only scored one goal. 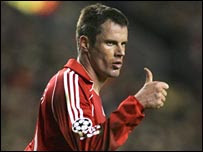 
(all pictures taken from BBC Sports)
Posted by Unknown at 12:00 pm No comments:

Chickens, Eggs and a gratuitious picture of boobs. 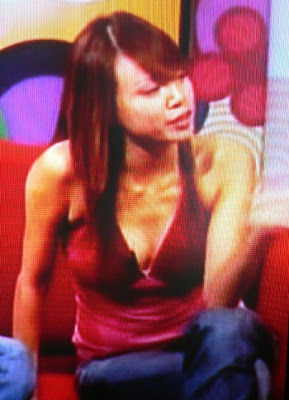 This post serves no purpose whatsoever but to distract everyone with Jamie Yeo's boobs while I get that bloody smug so-called 'anthem' off the top of the blog.

No, really. Really, no purpose whatsoever. Our traffic was dropping because of it. Serious. Nothing like a pair of boobs to get er... traffic up again. hur hur.

Oh all right, if you insist. Let's talk about the Champion's League then. Because if Liverpool manage NOT to lose 2-0 to Barcelona; and the Men.United managed to sneak (and I mean that in all senses of the word) another goal past Lille, then I'm really betting that they're gonna meet in the quarter-finals.

Sure wan. because everytime a draw comes along this season, Liverpool have been getting the worst possible draw.

Barcelona in the CL. Arsenal in both FA and Carlinglingus Cups.

So... what are the odds of Liverpool getting the Men.United if they both get thru?

Should be fun, no?

Eh, no, wait. Vincent, what is that you always say about chicken and eggs again?
Posted by Unknown at 12:19 am No comments:

Yeah, I know this is kind of old, but I love it. Dedicated to most of our rivals in the league, past and present, and to the fans. Enjoy!

Oh god, the Men.United are going to be bloody insuffereable tomorrow.

Thats it lar, I'm NEVER wearing a Liverpool jersey on match day EVER AGAIN. One or two times losing I can take it. Losing ALL THE TIME everytime I wear this jearsey is too much to be coincidence.

You know what's worse than actually fucking losing to that sucker punch? The fact that its so bloody unbelievable that a Men.United can be THAT fucking lucky ALL SEASON LONG.

Bloody Crouch. Am I the ONLY ONE who thinks the beanpole is fucking useless? Everyone was bloody CHEERING for him, and I was the only one shaking my head when he came on. And what does he do? MISS A GOAL.

Bellamy would have BURIED that shot ok? Or at least been able to at least bend down low enough to HEAD the ball DIRECTLY without giving the keeper time to adjust to the shot.

And next year, some teams luck is going to RUN OUT.

Fuck fuck fuck.
Posted by Unknown at 11:12 pm No comments:

People say that a trait of winning games which you don't deserve are the hallmark of champions.

Manchester United played a shite game. Liverpool played one of their best games.

But apparently, Manchester United's shite are better than Liverpool's best by a mile. Even when United are down by a very good man with just minutes to go. It was a looming defeat for my beloved Red Devils even when the Scousers didn't score yet. In fact, I remember being very pessimistic when I saw Silvestre come on much earlier. But that is another story altogether.

The story is how did the Red (and better) half of Manchester withstand enourmous ammounts of pressure minute after minute, half after half, shots after shots. The ratio of corners was 12 to 2. Shots on goal? A massive 15 to a single digit of 6. And what about those noisy scousers in the stadium eh?

The answer, my friends, is Belief.

Over to you Jose.

p.s. Good luck going up against Barca, Senor Benitez. Would you pull out Bellamy even sooner then? And how come he is the only Liversucker without that gay collar on his jersey? :)