Update on Yesterday's Match Of The Day

Arse Arsh scored first.
Ammonia gifted Man Yoo's first goal.
Diaby added a cherry on top with a comical own goal.
Wenger didn't know where to go after kicking the can bottle.

Two other meaningless teams managed to win too in matches no one else cared about.
Posted by Din at 8:26 pm No comments:

Looks like all 4 English teams got relatively easy groupings. Who the heck is Debreceni? 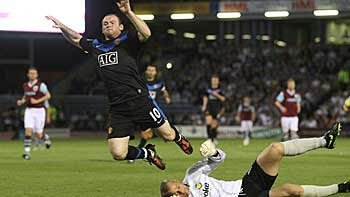 SOMEWHERE IN INGERLAND: Liverpool's greatest and arguably most dastardly transfer this year, Michael Owen, paid dividends last night when he helped Burnley to a 1-0 win over Men.United.

In the game last night, Owen did his part for Liverpool's cause by being completely invisible to everyone. He never put a foot wrong throughout the game (in fact, he hardly put a foot anywhere near the ball at all), and even managed to 'accidentally' drift offside AND miss a clear header during the game.

And to top it all off, Owen even managed to dupe Carrick into believing that Fergit had been referring to HIM when he said, "Michael, you're taking the penalties this game".

The biggest disappointment was that Owen never got the chance to finish the game, as he was taken off at the 63rd minute by a perplexed Fergit who thought he'd signed the next Henrik Larsson.

In other news, Stoke City didn't manage to throw the ball into the net at Anfield, though Liverpool did manage to knock it into the goal four times, as opposed to none in the last season.
Posted by Unknown at 10:32 am No comments:

Fuck. We really miss Xabi.
Babel is useless.
Voronin is useless.
C'mon Rafa splurge the cash ONE LAST TIME.
GET DAVID SILVA.
kthxbai.
Posted by Unknown at 9:35 am No comments:

This year, Hantu Bola will be celebrating opening weekend of the new season on BOTH days!

This is the only football viewing party that lasts for two days! We are more keng than that pretend jazz thing in the jungle! LOL
Posted by Unknown at 12:57 am No comments: 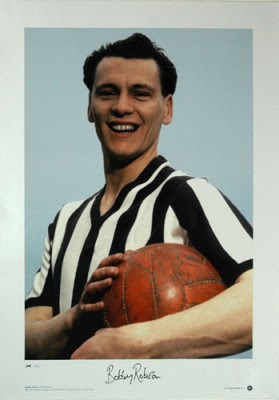 A legend has passed. Here's a tribute to Sir Bobby, hantubola style.

Alan Shearer has done very well for us, considering his age. We have introduced some movement into his game because he has got two good legs now. Last season he played with one leg.

If you count your chickens before they've hatched, they won't lay an egg.

Newcastle have always had a poor pitch in winter. We don't have the better weather. My lawn up here isn't as good as my lawn in Ipswich.

Football's like a big market place, and people go to the market every day to buy their vegetables. (Christina is a bloody expensive turnip)

Home advantage gives you an advantage.


So long Sir Bobby. You will be missed and thank you for the memories.
Posted by anttyk at 11:28 am No comments: