The truth about the beautiful game

I'm Lilyliverbird. I’m new here and Eyeris has asked me to write an intro.

Not much to tell, really. Basically, I’m one of those girls who watches footie for the blokes. Which is why I support Liverpool cause them boys look really good in red. (Real Madridiculous should change their jersey colour. White makes Ronaldo look fatter. This is essentially why they haven’t been winning trophies lately.)

My heroes are Owen and Fowler. When I grow up, I want to marry Owen and shag Fowler on the side. In my spare time, I’d do Ronaldinho Jar Jar Binks too. He’s cute.

I watch football for fun. I don’t bother with statistics, formation, tactics, what have yous. Why should I? No one pays me Rafa’s wages.

I despise ugly players. They are not what the beautiful game is all about.

All ugly players should be benched! Which is why I never bother with South Korea. My DVD guy looks better than Lee Tak-Chun Soon. 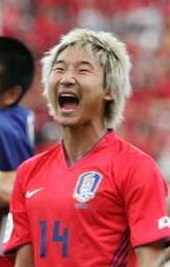 England will never win the World Cup as long as they have butt ugly strikers like Roo Roo Rotweiller and Peter Crotchless. (When is Rafa getting rid of him? We’d win a treble in no time if we get cuties like Podonski and Messi). Owen, on the other hand, makes a bad game looks good.

And I don’t think it’s a coincidence ManUre hasn’t won anything big since Roo Roo Rotweiller joined them. At least Rude van Horsey is leaving. One less ugly mug to avoid. Looks like Lil Miss Drippy, Christina Ronaldo is leaving the English shores soon too. The English would lynch her if Fergie doesn’t get to her first.

Ronaldo: Sir, Sir, did you see Rooney push me?
Fergie: “Stop whining you silly bitch or I’ll make you eat my shoe.
(Plonk!)
Bottom line is, cute players are important. Look at Germany. Lehmans may not be an oil painting but at least he’s not back-end-of-a-crashed-bus ugly like Kahn. If Kahn hadn’t been benched, Germany wouldn’t have made it to the semi finals. No way.

Same case with Brazil. Even though Kaka is cuter than Thierry Henry, if we go by the law of average, Henry is cuter than all the other Brazillians. That’s how he managed to score that winning goal.

There. An intelligent analysis on tactics from a girl who watches footie for the blokes.

I’ve done a Shebby. I’m so proud of myself.