It's off-season now. All we heard so far after the WC are clubs buying players, teams being relegated, Crespo waiting for his much wanted "release" and yadaa yadaa yadaa.

Not to forget, with D.Beckham stepping down from his post as captain, the marketing moomoos are coming up with contingency plans (already) to replace their $$Cow$$ icon. I guess they need to cash in on a new pair of Ken & Barbie Kenneth & Barbara should or if the BeckhEMPIRE reach its declining stage.

So far, a little bat told me that these marketing people are considering Ashley & Cheryl Cole. Ahemz. You think? Well, I think Cheryl Tweedy is fine. She didn't make it to no.6 in FHM UK for nothing, did she? If they had a WAGs poll, Tweedy will definitely lead the bitches. I don't mean "bitches" in a rude manner but it just so happen that WAGs also stand for Wisconsin Academy for Graduate Service dogs. Anyway, on to Cole the A.Hole. Well, look wise, he's not even close to good looking Beckham for goodness sake. Just looking at his face would make you wanna turn his face to look like biskut-marie-kena-tumbuk. And as for his personality, he definitely does not have a shiny halo over his head, not even a rusted one. So it's 50/50 (for now) for the Coles.

Next up, we have Looney Rooney and hoho-Coleen. I do not think Coleen is FINE and no parent would want their kids to make Rooney a role model. Even though Rooney (to me) doesn't really have a punchball face but he still has this very evil in a budak-budak way look, which I find quite funny in a weirdly annoying way. Oh, and Coleen aspires to be a singer. WOWee. Haven't she learnt from Victoria or Cheryl? Judging from her properous size, I don't think she learnt anything. Anyway, Spice Girls may have had their glory days and so have Girls Aloud but Coleen McLoughlin on solo? It's not gonna work. Not even if she's having vocal training with Atomic Kitten's voice coach. Where on the chart is Atomic Kitten now?

With such limited choices, I think the Coles will make the final cut (effortless) unless you guys have others in mind. Just this time (only this, ok?), I would very much prefer for the Becks to stay. I cannot imagine anyone else who can make it into marketing journals as often and as interestingly as they did (horrible voices, scandals and all). 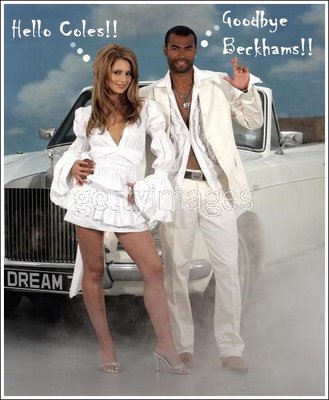 p/s-kay : This might be a Hooligan blog but a lil celebrity gossip to spice up the blog a lil during off-season won't hurt, RIGHT? *winks*
Posted by Naz & S-Kay at 3:12 pm