Initially, I put this post up in me own blog. A certain someone commented that it should be put here, despite the current fugly template and dodgy layout. Man, can't you guys centre the whole thing? I am getting lefteyetwitchitis and also fuglyheaderart syndrome. All the Head Hantus fault. Medical bill is in the mail. (Note to the boss: The banners I e-mailed not nice meh?)

I remember when I was a kid, way back in the 80s. We did not have iPods, PDA handphones or even compact discs. PCs ran at ‘blistering’ speeds of 16 MHz. Remember typing ‘dir/w’ to bring up the directory? Basic programming was the IN thing back then. I remember writing my own programmes and computer games. One of the first I ever ‘copied’ was the snake game, which proved so popular on the older Nokia phones.

Most importantly, satellite television did not exist. Which means no Astro. No live English Premier League football on Saturdays and Sundays. Nothing to live for during the weekends. I wonder how people lived through those dark and depressing times.

What we had was a weekly highlight show of the games played the previous week, subject to the whims of the RTM programme director. If he felt like it, the show would be aired. If not, you would be treated to a rerun of one of P. Ramlee’s old black and white movies. I remember the Orang Minyak episode. Still haunts me till this day. Damn.

On very rare occasions, the terrestrial television channels would air live games, but only if they are important games involving the big clubs – FA Cup final, Charity Shield. Man, I loved the weekly highlight show. Beggars can’t be choosers, they say.

My dad is a Liverpool fan, so I learned a lot about the hubcap stealing Scousers from him. I remember cheering on John Barnes, John Aldridge and Ian Rush as they play for the reds.

I couldn't give a rat’s ass for El Liverpool these days. Call it ingratitude. What passes as football in Anfield these days is shocking. Drab and dull. Lumping long balls forward at Peter “Bean Pole” Crouchy does not constitute football as I understand it. Pah. Liverpool’s fall from grace seems complete.

I am Black and White through and through. I grew up watching Chris Waddle, Kevin “Mighty Mouse” Keegan, Peter Beardsley, Paul “Gazza” Gascoigne and Mirandinha ply their weekly trade in the Magpies colours. I loved the team back then, as I do now.

Defence has never been Newcastle’s strong point, at least to my memory. But, we do play attractive, flowing, attacking football. None of that 1 – 0 nonsense. We win big or not at all. Most of the time, we find ourselves staring at the wrong end of a huge scoreline.

In 1996, Newcastle paid a (then) world record transfer fee for a certain fence creosoting Alan Shearer. And the rest is history.Wor Alan is the most complete striker ever to grace the Premiership. Strong in the air, can shoot with both feet, fearless, great at holding the ball up, deadly pace and makes great crosses. Shearer had everything. Andy Gray agrees with me. See here. *Pfffbbbrrrttt*

Shearer is a throwback to the old days of the big English centre forward. His is a dying breed. We may never see another like him grace the premiership again. I loved everything about the man - his one armed goal celebrations, stoic demeanour when deadpanning reporters even his wayward elbows (not that I condone them).

It is a pity that so many football fans have turned on Wor Alan in the days of his footballing dotage. People seem to conveniently forget that they too will grow old someday. I admire Shearer’s courage to stand up, accept reality and modify his game to suit his strengths. The anti-Shearer mob has objected to his overtly physical approach to the game. All I can say is that Shearer gave back as good as he got. If defenders can play rough, so can he. Now stop crying like a baby and go to your mummy.

As I reminisce, I realise how many happy memories Wor Alan had given me over the years. Etched in my heart and mind, will forever be the big Number 9 running with his hand upraised in celebration. 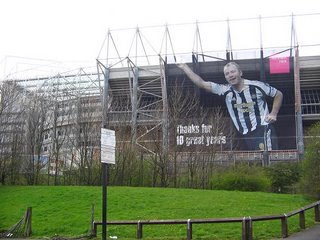 Alan Shearer's tribute at St. James' Park
As the greatest marksman of his generation retires from the life of a footballer, one can only wish him well. Lovers of football around the world are all the poorer for it. In the end, I can only echo what all Newcastle United fans around the world are saying:

"Wor Alan, thank you for the memories. Haway the lad!"
Posted by anttyk at 5:54 pm