Freddy Shepherd is a GIT

"This was one of the biggest jobs in world football and that we had a long list of high calibre and exciting candidates lining up hoping to get the job." - Fat Freddy

Cheebye. All that big talk and see what happens? What a farce. As nice as Roeder is, he is not the one for the job. Er... Sounds so damn familiar. If history repeats itself, we're fucked. And it's all Fat Freddy's fault. I hope there would be a surprise on Monday. Sigh. But I guess that's just clutching at straws.

One final point. Caretaker managers 'overachieve' on a regular basis. 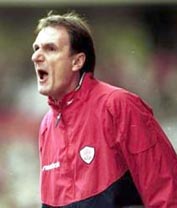 Remember this dude? What's he doing now? Hmm?
Posted by anttyk at 9:24 am