Because I had better things to do last night than to go hunt for a pub or a mamak in a hick town, just to watch such an inconsequential game, I had to rely on live updates from Tigerjoe. Also, it was for that very reason I had to listen to testimonials from Scums on how AWESOME that game was. Although, I find it more interesting that a lot of Scousers claimed that West Ham didn't deserve to lose, which makes me come to the conclusion that Liverpool didn't deserve to win.

Which is all cool with me since it was the same with last year's winners. This should be a permanent script for the FA Cup finals for years to come.

And after last year's finals, I thought, "Heck what the fuck are all those Arsenal players celebrating for? They just got gangraped!" From what I understand it was something sort of similar last night, and I am glad to hear that Jamie Carragher has rediscovered his scoring touch. Still, I thought about all this long and hard and thought, "Heck, if it makes people so happy to win by fluke luck, then thats not necessarily a bad thing."

So, here I am, a self professed Manyoo fan celebrating a Liverpool Treble for 2005/2006. 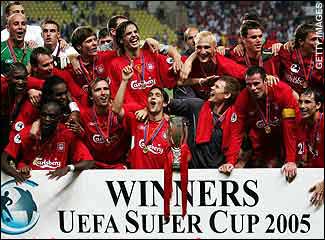 To celebrate the first major trophy of the season, Captain Jamie prepares to take one up the ass.

Only plastic Scouse fans would claim they don't care about the FA Youth Cup. You forget we are looking at future Scums - kids who would grow up to be pretty boys 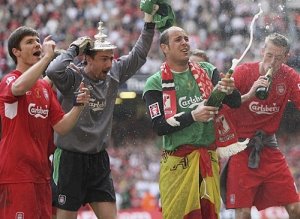 In the climax of the season, Pepe looks like he is about to climax while shooting off some white stuffs. Petey impersonates a drunk, Xabi acts pretty, and Dudek is his usual clown self.

And as a new fan of the Scum success, Vincent learns that, "When in Rome, do as the Romans do," so he decides he has to sign off in a typical Scum method.