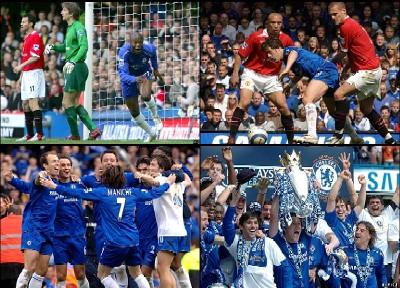 May the trophies keep flowing, every season from now till whenever.

I was the only blue shirt among a sea of mancs and scousers watching the match on Saturday night. What surprised me most were that there were actually Liverpool fans there who were cheering on ManYoo, as if it would change the fact that the league title are belong to us.

I would have thought that every scouser would be cheering a ManYoo loss, as it would allow youse to perhaps claim 2nd place and avoid having to qualify for next season's Champions League. I guess most of the scousers around me that night were just Chelsea haters who had no idea of the bigger picture. They probably just learnt that gay scouser club song in May last year too.

In any case, as the chords of "We Are The Champions" from Stamford Bridge competed with the voice commentary on the big screen, I sang along but with changed lyrics. That is, You're NOT The Champions. Then I quickly got out of there before I kena whack upside-down. LOL

On a more sombre note, Chelsea may only claim one trophy this season. What to do, we just aren't able to count the European Super Cup and FA Youth Cup as our cup double this year. As you may have observed, the Community Shield doesn't really count as a trophy. Even if we keep on winning it every year.

[all photos flogged from BBC Sports]

p.s. Apologies to Wayne Rooney about the metatarsal; but you made our Captain bleed mate. So there.
Posted by Unknown at 3:05 pm