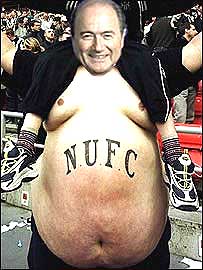 Mister Sepp Blatter, you are a fat fuck who should limit yourself to chairing committee meetings without actually speaking to the media. Or anyone with an IQ higher than 60.

Mister Sepp Blatter, you are a pukimak bigot whose latest victim is Michael Essien. You couldn't control your own Competitions Committee when it decided that a yellow card cannot be upgraded to a red posthumously, so you egged on UEFA to do a trial by video specially for Essien. How come Cristiano Ronaldo didn't get a trial by video too, for that birdie he flipped against Benfica? 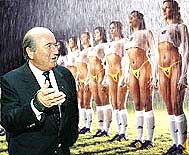 Mister Sepp Blatter, your track record for comments and suggestions to improve the beautiful game clearly show that you are a fucking fat idiotic MCP fucker. The King of Fuckwits, so to speak.

Yes, I is very the angry right now. This is the reason why.

Why is five the magic number for foreign players in any team? Is it because Real Madrid usually field five foreigners (Zidane, Beckham, Ronaldo, Robinho & Roberto Carlos) in their matches?

When a rich club gives loads of money to a not-so-rich club, it means that the rich don't get richer and the poor become rich (or less poor). This is not a case of rich becoming richer, poor becoming poorer. Ask West Ham whether they could have survived two seasons out of the Premier League without going bankrupt, if it wasn't for the fact that Chelsea paid fair value for Glen Johnson and Joe Cole. Plus the Hammers got £11.5 million from us way back when we bought Frank Lampard off them. Compare that to how Leeds United got ripped off by other clubs when they had to sell players after relegation.

Whoever said Chelsea, as an English Premier League club, don't have enough English players? Out of 25 players that are registered to play for us this season, 9 are English. That's one more than what Liverpool have, and more than double the number of English players Arsenal have in their squad.

One last thing: Roman Abramovich would certainly be more than happy to pay less for the players that Jose Mourinho wants to have at Chelsea. Is it really his fault that a couple of cheese-eating surrender monkeys jacked up their prices when they found out Chelsea were interested in Michael Essien last summer, or Didier Drogba in the summer before last?

For once, I actually agree with you.

hey.....u forgot about Manyoo! we should be given extra bonus points for having the most british players in the first team.

i just loved his 'no more draws' idea not long ago....

he's just bonkers. why on earth was he voted in as president again?!

I remember how he said that it was good to have an egomaniac like Jose Mourinho to talk crap in EPL , he must be feel so lonely as he's THE only ONE in FIFA to say stupid things .