It's almost the end of the year, and I figured do a litle review of the football year here.

Of course, since I'm a Liverpool fan, I'm going to completely disregard all the good things that happened to Manchester United (as if there were any), and gloat a lot about a certain trophy going to Anfield, thanks largely to a goal that supposedly wasn't a goal but eventually was a goal that got us into the final.

Anyway, here goes. I will always remember 2005 for: 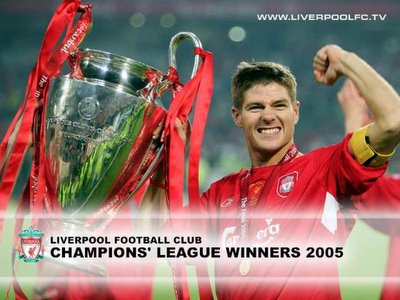 As you can see, 2005 had a lot of happy and gleeful moments for Liverpool fans like me. Will add more if I think of more. Until then, I shall hereby sign off the way the Christmas cards from Anfield allegedly went...

BUAHAHAHA!
Posted by Unknown at 2:57 pm

You are even FUNNIER.

you are most welcome to keep that broken cup.

we wants a new one for ourselves.