I may have pissed off a fair few people recently, especially Liverpool supporters. In order to prevent karma from coming round and biting me in the backside, I think perhaps some humility is called for. Especially since Liverpool actually won by two clear goals on the same evening I took the mickey on their last premiership trip to the Stadium of Light.
No more gloating then, lest the long arm of karma comes around and whacks Chelsea FC with a big, big stick. With nails sticking out of the painful end. *very the ouch*

I beseech Chelsea FC fans all over the place to not get too cocky; even if we are playing Middlesbrough this weekend. Tease them not for shipping 20 goals in 14 matches. Let us instead bow our heads down, and pray for our beloved Chelsea FC. 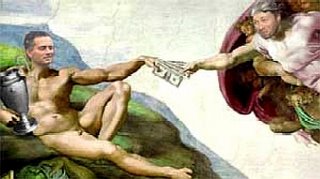 Our godfather who art in the directors' box,
Roman be thy name.
Thy empire comes, points will be won,
away, as they are at the Bridge.
Give the players their wages,
and forgive the goals conceded,
as we score a hell of a lot more than we let in.
And lead us not into relegation,
but deliver us from cracked trophies.
For the league, the cup and all the trophies are belong to us,
now and forever.

Now back to normal transmission.
Chelsea is teh pwn!
mwahahahahahaha *dr evil pose*
[ "Roman & Jose" by Michaelangelo, taken from The Gallery @ Guardian Unlimited Football]
Posted by Unknown at 1:55 pm

PHWOARRRRRR this is the most wicked Lord's Prayer I've ever read!! MUAHAHAAHAAH
*falls off chair*

If Mourinho's body was really that hot, I'd print that modified poster and put it on my wall and risk being suffocated by Naz.

Ahemz...I was wondering...if sugar daddy didn't come into the picture, would Chelsea be where they are now? *grins*

KY...you sponsor us all tickets to watch a whole league season then we can watch it live...outside of TV you knowww =P

once, a hr manager told me:
there are 4 phases in any human relationship -- the getting to know u period, the honeymoon period, the fight like hell period, the sayonara period.

i almost fell off my chair reading this one...bwahahahahaha!