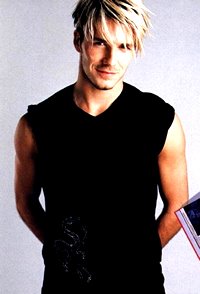 Now this is a 5-part bitch fest of short posts in lieu of my obedience to EYERIS who has asked me to post up 5 players that I dislike. In view of recent times (and posts), I will try my best to refrain from using the word 'fuck' or its derivatives... just so it'd be a challenge.

It is just impossible not to dislike David Beckham. As a full-blooded woman, I think Beckham is SIZZLING HOT (I've provided a picture for all the detractors!) but from a football point of view it has become really un-PC to like David Beckham.

Especially if you are a woman. I, however, have reasons... kononlah. Heh.

I know people who have transferred over their lack of support from Manchester United over to Real Madrid. He is THAT powerful.

Beckham was obviously drafted into Real Madrid as a marketing prop . Nothing more. As a football player, my opinion is that he can be considered above average but man, the kind of teeny-bopper mania that he inspires is just simply nauseating.

This just dilutes the fame and recognition that he would have got as a good football player and somehow, he didn't. I actually have to REMIND myself sometimes that the dude plays football.

To make matters worse, he goes further to perpetuate his 'diva' status by getting caught in an affair with his nanny. I completely lost my respect for him then.

as a gal, i hate him. coz he's got mickey mouse voice which makes me puke. coz he thinks he's so ham-sam. *puke*

as a football fan, i hate him. coz he's a one trick master. and he thinks he's so god damn impt that he MUZ be in the england squad. *spit*

the world will be much better without him.

I hate him coz he's overpaid and over-commercialised. And coz he's boring and he's ugly to me. And also coz most of the girls I meet always go, "OMG HE'S SO CUTE!" makes me wanna slap some sense into them coz I can't stand girls like that!

I believe the $50 million question is:

Did Beckham become femes because of Posh Spice, or was it the other way around?

If I may also suggest, Scousers shouldn't be so quick to profess their hatred for Becks. Liverpool do need a right winger, no?

at least he's good at whatever little he's good at. and it was missed somewhat when he left man utd for a bigger paycheck. in the end he's still the anna kournikova of football. shame.

he's still better than cristiano ronaldo, whom they bough as replacement.

and no, i am not a beckham fan, either.

Word has it that in Spain, he is the only galatico who the fans aren't pissed offed at.

I used to hate him, but now I realise his importance. You may say he's only good at free kicks, but when your team is down and playing badly, winning a free kick around the box might just steal a goal and get you that undeserved win.

Frank Lampard does that a lot these days. Of course we all know that htey are deflected and no where near as good as Beckhams. Haha.

I remember a quote that went something like, "His left foot is shite, but his right has an MA."

Say what you will, but the dude can cross, and he's pretty good in dead-ball situations. If he was fugly, he'd be lauded as a top player. Shame about his looks, then , eh?

at the moment, i think lyons' juninho is a better freekick taker :)