Firstly, an introduction. My name is anttyk and I am the latest addition to Hantubola. The main reason I am here, based on Eyeris and Vincent, is to take abuse from you guys as a Newcastle fan. A little warning though, as I will boil your bottoms, fart in your general direction and call your mother a hamster should you cross me! Ha.

Listed below are the five worst players in the premiership. Please note that the results are derived through a detailed empirical, statistical and technical analysis that is unbiased, objective and complete. In short, don’t argue with me. Hah!

At number five is the ever impotent Peter Crouch. It would be better to just stick a lamppost in the six yard box, and even then, the lamppost would get more shots on target than Crouchy. All you need to do is get Riise, Kewell and Gerrard to ping crosses at the lamppost. El Liverpool would win the premiership next season should they use this method. Benitez, are you reading this?

By the way, nice pants Crouchy. Steal them off Xabi Alonso?

Arsenal fans who think that the doofus shaped Pascal Cygan is crap apparently have not seen Jean Alain Boumsong play (or try to play for that matter). At number four, Boomsong redefines the word doofus and is hereby crowned the King of Doofuses. His loyal subjects being Cygan and the entire Sunderland team. 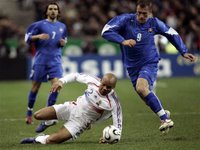 Opps! I fell down again. Klutz.

Robbie Savage comes in at number three. Has absolutely no talent at all – makes it up by sheer nastiness on the pitch. There must be dozens of players in the premiership sporting Savage’s stud marks on their millionaire shins. 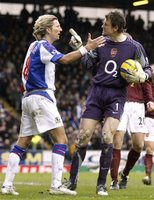 Why can’t we be friends? Savage looks like a rat from certain angles.

The runner-up medal goes to Arjen ‘Robber’ Robben. Chelski’s win over the red scouse team recently was marred not by the handbags which usually accompanied top of the table clashes, but by Robben’s tragic attempt at acting. Touch his cheek and down he goes, as if hit by a pile of bricks. Out comes the referees card, and *ding!*, he is cured. It’s a miracle, I tell you.

Fortunately, life is fair... Well, sometimes. What goes around, comes around Mr Mourinho.

However, at the end of the day, the only player who can incur the wrath of millions around the footballing world is none other than Cristiano Ronaldo. We all fart in his general direction.

Fucking incapable of making decent crosses. Trips on thin air. But, I have to concede, he is better at cheating than Robber.

One word comes to mind.

Oh… I think I need to crap. Fucking piles.
Posted by anttyk at 5:31 pm