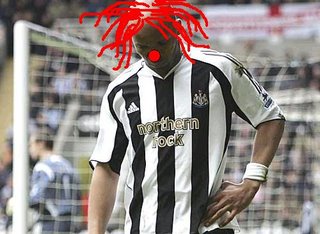 Woit!!! A few days away from the PC and this happens? Through no fault of my own, you see, as I was flying at 900 km/h in a little tin aluminium cylindrical tube, sitting in a cramped little seat, next to a goatish-smelling orang putih who kept invading my territory with his fat, pudgy arms. Have you noticed that all of them smell the same? They smell like goats! They say all Asians look alike to them, so I think it is only fair game to state that they all smell alike, that is, like goats. Okay, back to my rambling... Err... Where was I? Oh yes, sitting in a cramped little good-for-nothing seat where you cannot sleep properly (despite the fact that the flight took 13.5 hours), cannot feel comfortable no matter what position and space so tight that you feel that the blood circulation to your nuts are cut off. If I become sterile, I am suing MAS.

Also, give me a chance to get over my jet lag first, la.

Anyway, back to my Comedy Club. Let me ask you guys this question.

Is Newcastle United NOT entertaining?

Haha. Though you'd say that. My Comedy Club is the only club where:
1. Teammates can end up fighting one another and had to be separated by players from the opposing team. And how did they fight? Like girls, with scratching motions.
2. Little runtish strikers with foul mouths had to be grabbed by the throat by the manager. Man, I would love to see that fucking Bellamy choke-slammed and given the last ride by the Undertaker.
3. Manager was so old that he forgot his players' names. There are rumours that he is coaching Ireland at the moment, so I don't know what that means for the Irish. Man, do they need more four-leafed clovers and leprechauns over there.
4. Chairman is so fat and ugly that no one uses Your Momma jokes on his mother but on him.
Hey, I would take and accept all my club's weaknesses because I know in my heart that there is only one NUFC. No other club entertains like mine. I have to admit that we entertained the opposition fans on many occassions with our comical defending.
At least we don't do this:
1. Pass the ball around the midfield and hope that Lampard scores. Once he does, play keep ball until time is up.
2. Pass the ball to that cunt C. Ronaldo and hope that he trips over himself in the penalty box AND get a penalty.
3. Ping crosses at the bean pole and hope that somehow he manages to stand still and not flinch when the ball is coming at him.
AND, we try to play football. Porous and fucking lousy defence be damned! We are a football team, and we PLAY football. Arsenal has my respect. Their brand of flowing football is the stuff of legends.
Later.
Posted by anttyk at 12:32 am