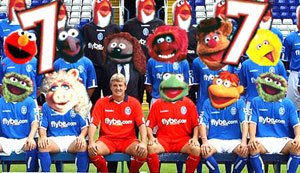 I do wonder, especially since:

I still demand to know why Birmingham are in the Premiership. It would have been more fun to have Norwich City around; at least that aunty is funny when she's had a few drinks.

[photos taken from The Guardian Gallery]
Posted by Unknown at 9:10 am