Welcome home to the Kop, God!

This morning, I was awaken at an ungodly 11am on a Saturday morning by an SMS from Sashi, which said:

GOD IS BACK AT ANFIELD!

My first thought was:

So I reluctantly got up, went online, surfed to Soccernet, and saw this:


No, I couldn't believe it either. So I went to Guardian Unlimited, and saw this:

Fowler retraces his steps to Liverpool for free


Wow, God really IS back.

But like I said.... WHY? Well I guess it could only mean one thing - Cisse is on his way out. After his complaints, shooting for the barn's roof when the wall would have suffice during the Man Utd match, and just yesterday, assaulting his pregnant wife (which I DESPISE very much), maybe Benitez thinks it IS time to ship him out after all.

AND bring back an Anfield legend at the same time.

Ok, Fowler may 30 and a little washed up right now, and he hasn't played regularly for Man City. But he still scored a damn fine goal against Man Utd, and a hattrick in a cup tie recently. So maybe he isn't THAT washed up after all.

But anyway, he's still an Anfield boy, and I'll still welcome him back, mostly because of this five finger salute after scoring the third goal against Man Utd during the derby recently: 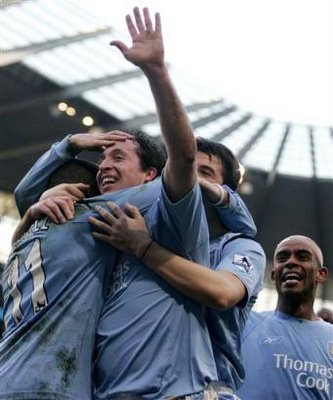 Welcome back to the Kop, God!

Now help us turn that one handed salute into a one-hand + one-finger salute....
Posted by Unknown at 11:20 am