Man Utd, The Most Generous Club in the FA Cup!

It's in the nature of us Hantu Bola to take potshots at each other and kick each other when our team goes down. tigerjoe does it all the time, but because HIS bloody team really ARE in no sort of trouble and are bloody winning all the time, we have nothing to shoot him about, except that 300 million pounds, which is hardly vintage "seething until eyes pop out" insult stuff.

Therefore, most of the time, it's up to the Liverpool and Man utd supporters to provide some fun, taking potshots at each other's misfortunes.

So it was that yesterday, when Liverpool JUST managed to scrape past Luton Town in the FA Cup by 5 goals to 3, Vincent decided to bring us back to earth with this:

Well, MY reply to THAT was this:

Today, I woke up in the morning, surfed my way to Soccernet, and realised that I should rephrase my retort.

Asfter all, Man Utd aren't LOSING at all! No.. far from it. They're merely DRAWING.... To NON-LEAGUE CONFERENCE TEAMS! 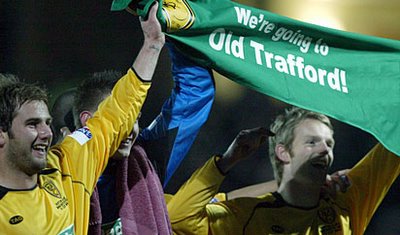 (Pix Of Burton Albion players looking forward to their trip to Manchester taken from Soccernet.com)

Sure, it's just the FA Cup, and sure, you'll probably crush them 8-0 at Old Trafford.

But you gotta admit, Man Utd HAVE been very generous in the past two FA Cups huh? First you helped the coffers of ANOTHER Conference side Exeter City last season by giving THEM a replay, THEN you decided kindly to present one last trophy to Patrick Vieira during the final, and now, you've decided to be generous again, and help out poor Burton Albion, a team made up of amateurs who probably have to shine their own shoes, and give them an ALL EXPENSES PAID trip to Old Trafford to play football!

The Glazers are so kind! *sniff*

Man Utd, with your extreme acts of generosity, you are proof that the romance of the FA Cup is alive! BUAHAHAHAAHAH!


PS: Did you REALLY think I'd pass up this glorious chance of a cheap shot, Vince? haha. Your turn!

(In other news, Spurs weren't doing so well either, were they? -

(And neither is Man Utd's former captain: Keane debut ends in humiliation)
Posted by Unknown at 11:09 am