REVEALED! The secret of how Burton Albion held Man Utd

Do forgive me for my gleeful cheering HERE when your team of young players drew with Burton Albion 0-0 in the FA Cup.

I did not know the complete story. It wasn't just the bad pitch, or the fact that Man Utd fielded a team of young players. It was for a completely different reason that the Burton players managed to pull of such a shocking result - they were all taking a highly suspicious and unusual substance!

This was what they were taking that made them so hard to beat that day: 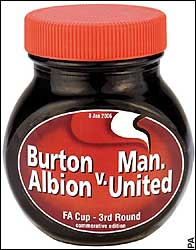 Bovril gets behind Burton

Burton Albion have gained some unusual support ahead of their FA Cup clash with Manchester United this weekend.

Bovril, which is made in Burton and was once the football fan's half-time drink of choice, has changed its traditional design for the first time in its history as a sign of their backing of the club.
Limited edition jars of the drink with a commemorative label have been produced to celebrate the match this Sunday at Burton's new Pirelli Stadium.

It is the first time Bovril has meddled with its red and black design since it was first invented in the 1870s.

Now, don't you wish YOUR team had beef-flavoured paste to eat before every match?

So there you have it. Because I now know the TRUE reason for Man United not winning against the Brovil Boys, I shall not attempt to chide them on their team not being able to win in last night's Carling Cup semi-final first leg.

After all, it's only the first leg, and it was at Blackburn, and you WERE fielding inexperienced youngsters like Ryan Giggs and Gary Neville as well as backup players like Alan Smith, Wayne Rooney and Rio Ferdinand....

Go have some Bovril before the next leg!