asshole of the year 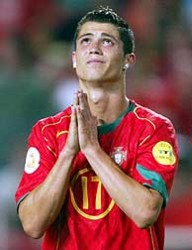 Look, bitch...no amount of praying is going to change the fact that you are a fucker

Yes, I know we are only 4 days into the new year, but this monkey faced cow gets my nomination to be the WORST EVER manyoo player in recent time. Forget Djemba Djemba and Kleberson, this imitation asshole is the worst of the lot.

Its not because he can't play football. He showed against Bolton and against Milwall in the FA Cup finals that he IS a good footballer. That he CAN play when he wants to. And that's why its even more irritating. With Kleberson, you knew he was useless and there was only so much you could expect out of him. But with Ronaldo, you put him on the pitch not knowing whether he would have the mood on that day to run after a stray ball or to actually PASS the goddamn ball.

Showboating makes for awesome football...but you DO NOT do such shit when you are losing. Not when you need a result. Not when your team is depending on you. Not when your strikers are waiting for a pass. I saw numerous times when he could pass it, but decided to do a fucking step over, and by the time he was done with it....the Arsenal defence had tracked back. And when you have an OPEN GOAL you fucking tap it in, not blast the thing and end up getting it at the back of the stands, you brainless asshole. Even I know that and I'm no pro.

And when you are playing on the same wing as Pascal Cygan and you can't get past, you know you don't deserve to play football, not even for Selangor, not even for Doncaster Rovers and certainly not for Manyoo (I'll be fair...maybe he is good enough for Liverpool).

The problem is he is a self centered bitch who doesn't know teamwork like yesterday, when it was the 85th minute or something and we had a free kick and everybody pushed up, this fucker decided to have a shot ala Roberto Carlos from something like 45 yards. Fuck....was he hoping for a deflection? With that many players in the box, not even Frank Lampard would have been able to deflect it in. Or that time against Benfica when we needed a result and he was fucking juggling the ball IN THE WRONG FUCKING DIRECTION.

Its not always that I disagree with Fergie. This asshole has to leave. If Chelsea want to buy him....good. He will probably fuck them up and then maybe we can win the title.
Posted by vincent at 7:44 pm

What was that phrase Paul Masefield likes to use?

But then crap can count as an end-product too, no?

pls do not associate such fucking ugly cock player with the GREAT LIVERPOOL FC, we prefer Harry Fat Kewell over your fucktard anytime..

The asshole's still at ManUre.

Hahahahahhaha. Funny. Good thing Liverpool decided to be 'tai fong' and let Man U buy him instead. =p

bex : Who you kidding? Liverpool didn't know squat about him. Houllier's scouting system wasnt exactly awesome you know. Manyoo made him famous.

i doubt mourinho or benitez would give him as much room to showboat as Ferguson or Wenger...

reminds me of joe cole ... crack the whip! and end the bullshit!

Er, ookay, from what I remember Liverpool wanted to buy him at first and Ronaldo was practically begging us to take him in and all that nonsense. Then dunno what happened and then suddenly he went to Man U.

So what if Houllier's scouting system wasn't awesome? No manager in the world can make 100% great and effective purchases. Anyway, as long as Rafa buys players that can play in his system and they come out good, it doesn't really matter that much anymore.

ghoul : I disagree. Cole's critisism by Mourinho was unwarranted. Chelsea were leading by 2 goals and in no danger of losing that lead. Effective football is fine....but after spending 300 million pounds, some entertainment is required too you know

bex : Not true. Manyoo played a friendly against Sporting Lisbon and got whacked 3-1, largely thanks to that teenager called Ronaldo. At that time he waas an unknown. After the game, the senior Manyoo players persuaded Ferguson to buy him.

Yes, obviously no manager's record is 100%. But Houllier's record is HORRIBLE. That explains why he is no longer at the job, you know.

Glad that the asshole is still with MU, not with Chelsea. Kakaka...

Aiya! Vincent, you only saying this cause you don't have footballing skills. What more to compare to Ronaldo? School team also tak jadi. Typical Sour Grape kind of manyoo fan. When the team's not doing well, blame it on a player! Single out a player! Typical looser!
Bottom line is, Ronaldo's in Man Utd, and u're NOTtttttt!! Boohoo!

Che wah, Vincent has a fan.

But how come never introduce him/her self wan? Shy izit?

Fan? Che Wah! Vincent< This is about a cock talking bout his own cock, trying to make it look bigger than it actually is (tiny, almost invinsible)

and being Shy? Wah! Tigerjoe, what's your real name as in your IC? Tell me lar! Shy izit? Why your pic only show your back? Front too ugly kah? LOL!

Sumore laugh at his own jokes. *shake head*

*shake head* what da f**k are you talking about? What joke? What joke? Got joke meh? I joke with you meh? Alamak where's the joke? That was pure sarcasm! Dun even know how to differentiate? tsk tsk tsk *shake head again

Alamak! Some people, show their backs and try so hard to be clever *shake head again, and again!*

Eh Tigerjoe, your picture actually does not show your back. I think your dick is showing lar! White dick some more

tigerjoe : Dude, congratulations over your first fan. Unfortunately, long time more before you can build up a fan base to match mine. Hahaha

vincent: I actually jeles of your fan base mah. My sole fan is resorting to using diff nicks, damn paiseh wan.

Well at least we know who's fucking who... Could it be Vincent fucking Tigerjoe? Or Tigerjoe fucking Vincent? Make sure both of you use condoms yar? The arse hole is a bit rough, I'd say! Especially Tigerjoe's! *wink I'd know ;)

Wah..itu guy who called Vincent a Sour Grape fan abit bodoh right. Only a real fan would really honestly criticise a player of his fav football team when the player is not good (or not doing well). Those bodoh punya fan would only know how to put the blame on the winning team.

I mean, heck...if Gilberto is playing like shit and the team lost because of him...don't tell me wanna go blame the winning team right? That one not only a sour grape but also a sore loser kinda fan!!

I cannot stop laughing btw..kejap Tigersfan, kejap Tigress...that person got personality disorder is it? LOL..a male by day and a female by night or vice versa (or perhaps at the same time) LOL

Damn...I'm gay? Gay mood gotlah...but I do love men..love them to bits and pieces. LOL. BTW Puma/Tigress/Whoever-You-Are, I have a boyfriend. Shocked onot? And he kisses me ever so tenderly every night before I sleep!

And ahemz..MR.S-Kay here would love to advise you to read properly what I typed next time because siapa makan cili, dialah yang rasa pedas.

When I said, "Those bodoh punya fan would only know how to put the blame on the winning team", did I indicate I was talking about you? I think a bodoh punya babi is even smart enough to know that only those who terasa would think I was talking about him. LOL. I mean, you only said that Vincent likes to put the blame on players and etc wad..you where got mention yourself putting the blame on other clubs so why are you so erm...defensive over what I said unless of course, you ARE the kind of bodoh fan I'm talking about lah if not then I suggest that you stop making a fool out of yourself herelah my dear. But then again, we do enjoy your company here..you're such a mood lifter to each and everyone of the bloggers at Hantu Bola *coughs*

Eh eh...are you cute? Maybe you can put yourself up for an interview to be my new partner..I'm seriously interested in getting a new GUY with so much passion for trolling. LOL.

Wah! S-kay or should I say ASS-Kay. Oitt! Haven't you heard the term gay being used as a general same sex relationship too? Meaning Lesbo? Use your BABI brains before speaking! So wat's wrong with you fucking a guy and a girl at the same time? Fun worrr! Anyways, I so pity your Big Fuckin BF. Sigh~ I guess birds of the same feather flock together-gether! Silly old wrinkled vagina! And yups, I do agree with you having people like YOU and ME cutting each others' throats! Bring it on, BIATCH!

Don't worry, I will ALWAYS be here but it's hard to get such an unintellectual troll like you around nowadays though. Gotta buy you a beer next time lah for cheering us all up here with your really erm...'brilliant' comments =P