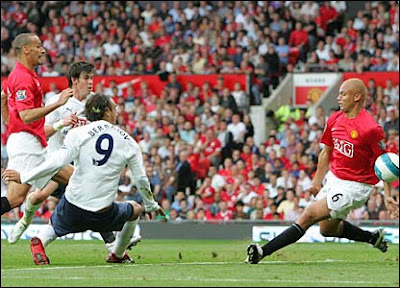 Men.United managed to sneak their first win of the season thanks to a goal by KaNaniNe, some wonderful goalkeeping by GoWest Brown, as well as an inexplicable possibly-bomoh-induced miracle that enabled the ball to slow down drastically when rolling towards the Men.United goal.

Speaking of miracles, there were none for lowly Russian team Chelski as their pudgy midfielder Frank Lampberger scored his 244123st deflected goal to beat the mighty English team Pottymouth, managed by a fugly-manager-with-a-hot-daughter-in-law.

In other news, Keane's Cats are well on course towards defending their Championship title next season with a second loss in a row, this time at home to the Liverpool Hubcap Stealers. Andriv 'HHH' Voronin scored the crucial second goal to add to Momosoko's impersonation of Stevie G.

Derby look almost certain to join them in the fight for promotion next season after losing 2-1 at home to Birmingham despite the fact that the Brum keeper is a dumbass who should have kept out that Chelsea goal two weeks ago.

And finally, the Gunner Non-Issues became a bit of an issue, beating Sven Sony-Erikson's Man City despite the Swede prefering women (allegedly). The Gunners won thanks to a missed penalty which led to Kasper Schmeichel giving them a goal to console them.

Kasper later tried to take back the favour by trying to score a goal, but unfortunately for him, Calamity Jens was not playing.
Posted by Unknown at 11:20 am