WERE YOU NOT ENTERTAINED?????

I feel so refreshed.

There's nothing like a good night's sleep after a late night watching football. And nothing like staying up late to see your team win and enter a European Cup final.

Of course, I'm not talking about last night's match. Duh.

AC Milan crushed Manchester United 3-0 in their Champions League semi-final second leg at the San Siro to set up a repeat of the 2005 final against Liverpool. Trailing from the first leg Kaka, who scored both Milan's goals in the 3-2 loss at Old Trafford, opened the scoring and Alberto Gilardino and Clarence Seedorf capitalized on some laughable defending to secure a chance to revenge their defeat in Istanbul.

So, those of you who watched the match....

DID YOU wake up this morning (the second time) feeling ENTERTAINED after watching your defense fall apart?

DID YOU wake up this morning (the second time) feeling ENTERTAINED by your side shipping three goals?

DID YOU wake up this morning (the second time) feeling ENTERTAINED by watching your team get trashed by only the THIRD best team in Italy?

I know I was, and I didn't even watch the match. I mean... take a look at this picture of Van Der Sar. How can you not be entertained by that? 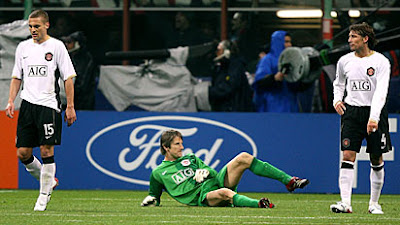 Anyway, I admit it. I made a mistake. I was expecting Milan to win 1-0.

And yes, Milan, vengence indeed. We don't have Djimi Traore in the team anymore. So bring it on.
Posted by Unknown at 11:10 am