The Ham Is Beck and McLala Sucks 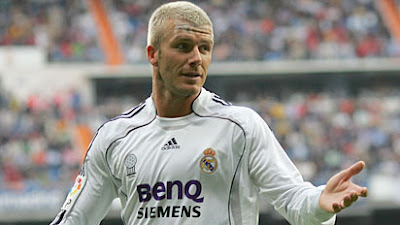 After so boldly leaving him out when he took over, Steve McLala has decided to recall Ham the Man, because apparently after losing to Spain 1-0, "It was clear things needed changing and David came into the reckoning then."

All together now. BODOH.

How old is Becker now, 32? 33? How many more quality games will he get to play when he goes to that MLS Retirement Home? The only reason you dropped him was to change things in the first place. You've got way better players and not to mention younger ones in that position now, and calling Pecker back is only gonna deny these players a chance to prove themselves in that position.

Yes, even though you SAY it's not a panic measure, this has all the signs of a manager who is out of ideas and is desperate for a result. "Because thanks to your bloody useless managerial skills, England have not had very good results , have they?

No, England are crap because YOU are crap, Mr. McLala. You were never any good in Boro, churning out team after team that played games that went for 0-0 draws even at HOME, and were even more boring than Chelsea vs Liverpool Champions League semi-finals and Chelsea vs Men.United FA Cup finals comibined.

With England, you've got the best players like Gerrard, Lennon, Lampard, Rooney, Terry, Joe Cole, all at your disposal, and STILL you can't win games against opposition like Macedonia... SURELY that can't be down to a lack of funds to 'buy' players eh?

But then again, I don't care. I don't gives two fucks about England anyway, as long as they don't get our Liverpool players injured...
Posted by Unknown at 11:42 am