This is my take on things, continued from Eyeris' post.

I am of course gutted that Manyoo are not coming. The last time they were here, it was Ruud van Nistelrooy's first ever game for the club. He hit the bar and the post in the first 5 minutes of the game. As much as non-Manyoo fans hate him, it would be a lie if anybody says they wouldn't want to watch Cristiano Ronaldo in action.

I personally think this whole hoo-hah is AFC's fault, not FAM, and certainly not Tourism Malaysia. The facts are simple. Manyoo were supposed to play on the 27th of July. We are hosting one of the semi-finals on the 25th, after which the tournament goes to Indonesia for the 3rd/4th play-off on the 28th and the finals on the 29th. NONE of the dates clash.

FAM are acting as they are now because of pressure from the AFC which is totally understandable, and Tourism Malaysia is certainly doing the right thing trying to bring Manyoo to Malaysia. I can only imagine that hundreds, possibly thousands of Singaporean and Thais would come into the country to watch the game.

Quite simply, this is AFC's fault. In fact, I would even go as far as to say that this was done on purpose. AFC screwed up big time by allowing FOUR countries to co-host this event which is proving to be a logistical nightmare. You want support from the host country? Fine. But the problem is that the tournament isn't even in Malaysia by then! And certainly, baring the intervention of bookies and dodgy characters in the underworld, NONE of the co-hosts will even get past the group stages, not to mention the semifinals!

AFC, in particular Mohamed bin Hammam talks about how detrimental it is to Asian football that Manyoo are coming at the same time the Asian Cup is being held. But surely, a win-win situation can be easily worked out? Quite simply, Manyoo will come because of the money. It is the FA's fault or the AFC's fault that they choose not make the most of the trip.

They can easily force Manyoo to hold football clinics and get Fergie to have a sharing session of sorts with local coaches! And since 'Asia's top stars' are in town surely, a joint football clinic can be held for kids together with the players of teams that have already been eliminated from the tournament! Surely Asian coaches (not just Malaysian) could do learning a thing or two from Fergie and Quieroz? They can easily give Manyoo an ultimatum - conduct this this this clinic, conduct a coaches' session or don't come. David Gill isn't an idiot. They will do anything to sell a few more shirts. Plus, it is a good marketing move on Manyoo's side. Corporate social responsibilty and all that boo-hah come into play. An excellent PR stunt, no?

But no, the AFC choose not to do that. Very easily, they say NO DON'T COME. You can speculate on anything you wish, but how about this?

"In order for a long-term sustainable development, we need commercial investment, and I am delighted to welcome Chelsea Football Club as our first development partner where the commercial opportunities of the Vision Asia project have also been addressed," said the Qatari.

And here comes the killer...

How on Earth can the PRESIDENT of the AFC say something as stupid as that? How is this sort of program anything but a win-win? Chelsea increases their presense in China, gain more fans, and will ultimately sell more shirts. Oh, and how about the fact that Chelsea can unearth more hidden talent and increase their scouting network, hence saving loads of money on transfer fees? 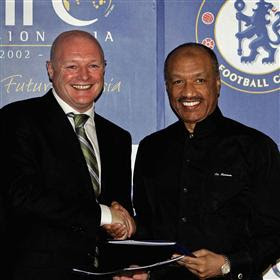 You can be less cynical and call the AFC idiots for not knowing how to exploit and take advantage of an awesome opportunity. Or, you can buy the conspiracy theory and want to believe that the AFC are only doing this because of their ties with Chelsea. Either way, it is quite plain and simple that this whole hoo-hah is nothing but AFC's doing.
Posted by vincent at 5:50 pm