Even though Manyoo won a messy game which all but clinched the title, I have decided to wave the peace flag.......at least for the next few hours till the Chelsea game.

In the news today:

I mean, these days it is probably the second best site in the world (this is the best, of course). It is entertaining, and even on its off days, it can entertain you to a certain extent. That is for the neutrals of course. And the two bloody nerds who thought up such a no-brainer in their house garage or some place.

See, it entertains you, until you turn into the victim of that entertainment. Then you start to boo and hiss at it, even though it has been nothing but awesome. And, ALL THAT HYPE! Us being a football blog talking about YouTube is hype enough, and for some reason people don't like hype even though it is justified most of the time.

But never mind if you didn't get my message.

I'll say it in footballing terms which you might actually understand. I actually meant to say was..

If you look at YouTube, the football equivalent would be Cristiano Ronaldo. 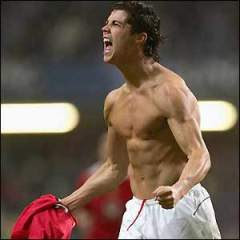