I couldn't watch the West Ham vs Arsenal match last night, as my telly was appropriated by fans of America's Next Top Model. That was the price for getting the telly to myself for the Chelsea match at midnight.

Anyways, the wonders of Maxis GPRS meant that I found out about the Pardew vs Wenger "boxing bout"; which made me laugh. Out loud, with a left and right roll on the floor. I was looking forward to seeing highlights of that during the half-time report for Totty Hotshit vs Champions Chelsea.

Little did I know that the Karma bitch was going to pay me a visit last night, and fuck me up big time.

I laughed again when Makelele sent a wondrous half-volley into TottyShit's goal 15 minutes into the match. I jumped from my seat when Drogba headed in a second 2 minutes later, but it seems that Karma had swung into action by then.

Graham Poll disallows a Chelsea goal, then flashes a second yellow card to our captain later in the game for some imaginary foul. In between those two incidents, the Totty Boys had managed to sneak in two goals. Fuck. Shitty Shitty Fuck Fuck.

Here's an interesting piece of trivia: Graham Poll is from Tring, which is in North London. Tottenham Hotshit are based in North London too. Coincidence? I think not. 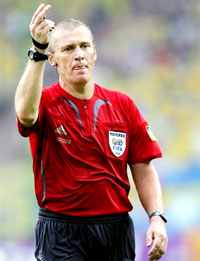 Fuck you too, Graham Poll.