Early in the morning, open Guardian, see this headline:

then I open Football365, saw THIS picture: 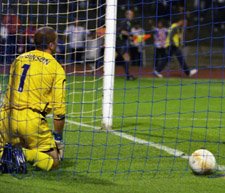 (pix of Paul "Take it from the Bitch, Give it to the Croats" RobinHood from Football365)

Robinson was caught out by a routine backpass from Gary Neville, which hit a bobble and ended up in the back of the net after the Tottenham goalkeeper swung and missed his attempted clearance.

And finally this headline:

McClaren: 'We Will Qualify'