Idiot of the Week

What a way to welcome the Puasa month.

I am angry. Very Angry.

I am very angry with this bugger. 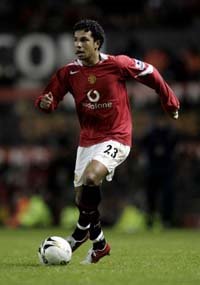 Watching the match with 3 other MU buddies turned into a real test of patience everytime this idiot touched the ball. I cannot recall any useful contribuition from him in the game. In fact, after his first 3 idiotic ball-passing techniques, I was devastated why Man Utd was playing with just 10 men and an idiot.

Attacking build-up without him were very promising. But just when Manchester United needed Richardsonofabitch to score/pass, he completely failed.

I remember throwing tissue paper, a Cadbury wrapper, a tin can and chopsticks at the TV when he missed a great chance in the second half. Damn was I pissed! And I think it wasn't just me and the rest of the ManYoo fans around the world, even the rest of the Red Devils on the pitch were pretty damn agitated as well.

Then, the gaffer finally regained his senses, with a sustituition getting No.23's ass of the pitch. Finally!

Manchester United then played more brilliantly. The Red Devils that I know have turned on the style and our saviour scored the equalizer. However, that was the only goal scored by us since Reading chickened out and decided to safeguard a lone point.

Ultimately, Richardson's uselessness meant he cost us a win. Perfect. Can somebody please go and whack him now? It would be better to send him to play with the reserves for a while.

However, I hope MU's lapse of form will soon turn for the better. As the scousers say, it is still early in the season.