They'd scored 12 goals against us in four matches this season.
They beat us at their home ground in the league.
They knocked us out of the FA Cup at Anfield.
They humiliated us in the Carlinglingus Cup in front of the Kop.

They've have also been knocked out of the FA Cup,
They've lost the Carlinglingus Cup final,
They got kicked out of the Champion's League,
And they lost to Everton in their last match.
And now THIS:

And to add insult to injury,
They even let Crouch, of all people, score a hat-trick against them.
Now that's REALLY gotta hurt. 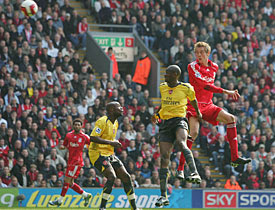 PS: Cibai Blackburn. Couldn't hold on to a lead.
Posted by Unknown at 12:14 am