Portsmouth gets my vote for most accomodating team of the week.

First, they beat the team at the top of the table 2-1, making it interesting for the rest of the world (especially the ABUs) by throwing the title race open.

Then two days later, they lose to the team at the BOTTOM of the table 4-2 giving Watford a friendly but frankly inconsequential boost and making the relegation fight even more interesting. 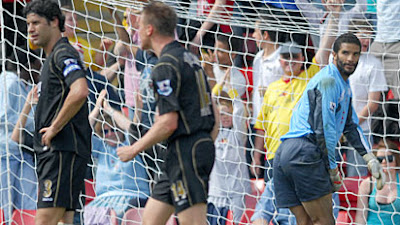 
Not a bad week's work, Harry.

Now, do us a favour - roll over and die when Liverpool visit you on the 28th.
Posted by Unknown at 11:11 am