Ten-men and a Lamp-post Draw with Pompey 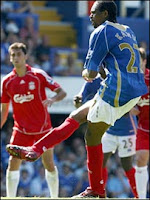 PORTSMOUTH: Totoro Hotsoup won the first half of their game against Arsenal but their defenders decided to let them win the second half after the Gunner Kids started crying; while Liverpool nicked a point at Fortress Fratton despite giving away a penalty and playing with ten men and a lamp-post.

The Arsenal-MSSM team are now top of the table, after Totoro Hotsoup defenders continued their revival of the Art of Comedy Defending (which has been so sorely missed ever since Newcastle sold Bramble and Boumsong) by gifting Fabregas one goal, and 'Not so Useless After All' Adebayor two goals in the second half.

Liverpool are second on goal difference, after Rafa Benitez's unique tactic of trying to distract Portsmouth players by sticking an inanimate lamp-post in the middle of Pompey's penalty box (instead of his best players) backfired when the lamppost disappointingly did nothing more than stand there.

The lamp-post played brilliantly for a lamp-post, it's not-jumping and standing-still skills were outstanding; while it also outdid itself by actually falling over a few times when a normal striker would have challenged for the ball. The Lamp-post did not have much help from it's supposed strike partner, an Alleged Fat Boy from Ukraine, who at least managed to do more than stand still and not jump.

Liverpool also conceded a penalty when Adebola decided to exchange shirts with a Pompey player a little too early. Fortunately for them, Kanu was being Kayu, so no goal.

In other news, Men.United stole yet another win in their fight against relegation as the dumbasses from the Blue side of Liverpool let them win at home.
Posted by Unknown at 10:35 pm