Chelski Score One For Entertaining Football 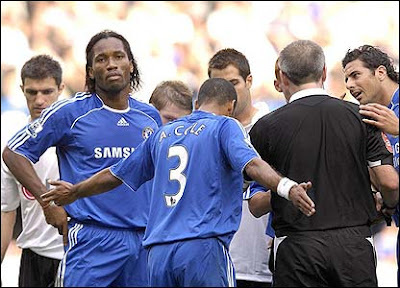 More SMSes of "WHY ARE THERE NO GOALS" were reportedly sent to Chelski fan Tigerjoe, as the plucky Russian team nicked a point via a scoreless draw at home against derby rivals Fullofham, who unlike Chelski, have an actual manager in charge, instead of a puppet.

Like last weekend, Chelski once again won 1-0 on red cards against Fullofham, and Drogba was the one who got off work early this time, having heard the enjoyable laughs Jon Obi Mikel had with Jose Mourinho when they watched Luca Brasi's fucking boring post-match speeches last week.

In the meantime, chants of One-Nil To The United rang out around the St. Andrews Stadium as relegation favorites Men.United rode their luck once again to win 1-0 against superior opposition.

MU Manager George Graham Ferguson was happy with the three points, saying that it was their hardest game of the season so far, ignoring completely the relegation six-pointer last week against charismatic-manager-less Chelski and the fact that his three strikers alone cost more than the entire Birmingham team.

In other news, Arsene's Kid Brigade won 1-0 at West Ham despite the fact that Ceh Fabbagus didn't score as expected; while the Liverpool Rotating Club only managed a 1-0 win against a Wigan side despite playing against Titus Bramble.

At the same time, more goals were scored in one game at Fratton Park than in the entire league combined, as Pottymouth and Reading decided to start playing rugby instead of football.
Posted by Unknown at 12:00 pm