Chelski On Course to Win Championship Next Season 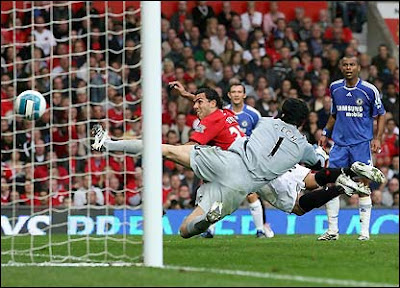 MANCHESTER: Having already won the Premier League twice in three years, Chelski have their eyes set on winning a title they have not won under Jose Mourinho - the English Championship - in the 2008/09 season.

Yesterday, the Russian footsy team stole a march on Men.United in the race to be favorites in that division next season, beating the American soccer club 1-0 on red cards but losing out on goals scored in the end.

Coming out to punch a cross by Ryan "Mr Celcom" Giggs, goalkeeper Peter Cech was distracted by a fugly flying Colour TV that diverted the ball into the back of the net during the first half.

Brother Louis Louis Saha then got a perfect ten penalty by executing an Oscar-Winning impersonation of an Olympic diver (complete with flailing arms and thrown back head) in the second half when Chelski's Israeli buy-one-free one defender kicked one of his leg hairs.

In betweem the two goals, the supposed 'New Essien' managed to get off work early to join Jose Mourinho outside the stadium to laugh at Avram Grant's fucking boring post-match speech. 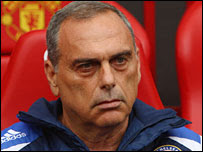 Rumours that Roman Abramovich was in the Chelski dressing room at half time trying to teach Joe Cole how to be a defender in Russian were unfounded.

In other news, Liverpool got a 0-0 draw against a bus, while Michael Owen got injured (shock! horror! waht will England do now????!!!!!????). Oh, and Derby continued their pre-Xmas generosity, gifting another five goals to the not-so-poor Arsenal kids.
Posted by Unknown at 5:09 pm