Shebby Singh Finally Gets To Gloat! 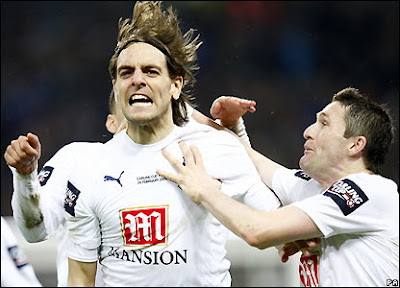 LONDON: Hantubola's favorite poondeque Shebby Singh finally got a chance to gloat as Tottenhamncheese Hotsoup came from behind to beat the Vodka Appreciation Club of Chelsea and win the coveted Carlinglingus Cup.

Didi "Still Fugly" Dogba had scored for Chelski at first when Paul "A-booo-CHAK!" Robinson decided to play hide n seek instead of football, and hide behind the wall during a free kick.

However, Dimitar Bubbatov later equalised for the Spuds when the ref gave them a penalty after Wayne "Better Than Cashley" Bridge saw a mosquito on the ball and tried to swat it with his hand.

Then, in extra time, Jonathan "I played for Real Madrid!" Woodgate got off his hospital bed long enough to scored the winning goal by pretending to head the ball and forcing Cech to punch it into his head instead.

The smirk on Shebby's face when Fatty "EVENING NEWS" Lo admitted defeat was too much for Hantubola contributer Tigerjoe, who almost committed hari-kiri in the middle of dessert.

In other news, Sir Bobby Robson celebrated his 1375th birthday by witnessing his former side Newcastle Comedy Club win 1-5 on goals conceded to some other united team of men; Nando "Peri-peri" Torres scored more goals in a single match than Dirk "OVER THE BAR!!!" Kuyt has in the entire season, and the Gooners saw two points as well as 8 million pounds worth of Croatian leg broken and flushed down a bleak and murky Birmingham drain.
Posted by Unknown at 7:29 am