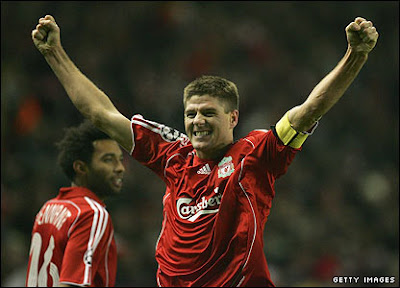 As a result, he woke up refreshed and happy, and was able to recieve the news that Liverpool had spent 85 minutes brambling around again before finally scoring two goals and tah-pauing Second Division team Barnsley... oh wait, that was a dream... UnInterEsting Milan. 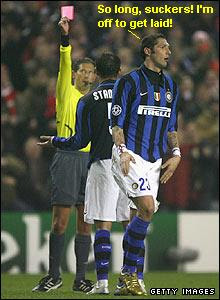 As such, Eyeris was happy that he was spared the 85 minutes of anxiety before Dirk "Headless Chicken" Kuyt scored for the second game in a row, but this time Barnsle.... sorry, Inter could not get back into the game because Stevie "Leopard Print Jock Strap" G also scored.

In related events, Marco "HEADBUTT!" Materazzi realised halfway through the game that he had double booked his date with his regular hooker from his Everton days and decided to get a red card so he could get to his date on time.

In other news, lowly Ruski team Chelski went to Greece and bought a couple of eggs to take home to London. rumours that Fat Frank later fried them sunny-side-up to go with his bacon and cheese grease sandwich were unfounded.
Posted by Unknown at 12:26 pm