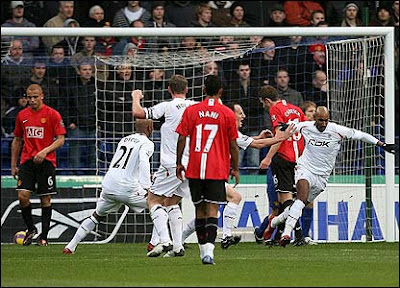 INGGERLUND: American soccer club Men.United proved a Hantubola commentator's point that not having a single player in the dismal Ingerlund squad that lost to the Croat-Croats on Wednesday was the best thing that ever happened to English football; as they proceeded to give all the UnUnited-Men in the country something to cheer about - and at the same time giving Medium-Size Not-Sam's Bolton an early Xmas present.

So generous was Sir Alex Ferguson that he even decided to lift the mood around the Reebok by going home early to sulk.

In other news, Roy Keane decided that Derby's tactics were the way to go as Sunderland also gave Everton seven early Xmas gifts to be given out among the squad, though that Yakubu decided to bag two for himself, that greedy bastard (Rumours that Phil Neville was found crying in the shower room with some broken ribbons in his hand were unfounded).

Also happening around the EPL, Rafa-rafa decided to do some coaching instead of whining about money again, and stevie found-his-G-Spot by showing just how much the ingerlund loss had affected his confidence by not losing 3-2 to Newcastle not-very-United. A minor miracle was also achived at St. James' Park when Dirk Headless Kuyt actually scored a goal using his own skil.... oh wait.
Posted by Unknown at 2:08 pm