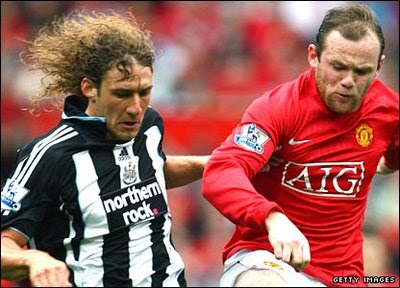 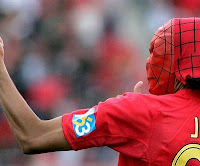 NOT BEIJING: Team MUSA's quest for the Olympic dodgeball gold medal continued last night, as they sent out their best under-23 team against the carToon Army who underlined their aspirations to win the EPL by recruiting cartoon superheroes instead of players.

The game at Old Trafficlight last night was a fabulous display of world-class dodgeball, the best the Olympics have seen. The highlight came when Paul Scholes, one of several over-30 players in the AManYoocan team, fired an amazing shot straight at Mysterious-virus-carrier Rooney's ass; while Fraizer Campbell headed another amazingly accurate shot at carToon keeper Shay Not-Given-Away's forehead.

Defender Steven Taylor's College also had a good day, taking out several MUSA players with some brilliant kicks to the shins.

In the end, it was the carToon who lost out, as their forward Obefunnyname Martins completely missed a shot at striking out MUSA's keeper by heading wide and into the keeper's goal instead. Fortunately for them, two minutes later, MUSA's Darren Flatchair returned the favour, kicking the ball AWAY from Given instead of at him.

Dumbasses. Don't they know how to play dodgeball properly?