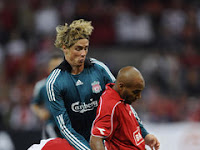 HOEGAARDEN LAND: Liverpool's season is now over, according to esteemed football pundits, as they demonstrated how NOT to lose a game even when there is a penalty awarded against you.

In a land where most of the local beers are much better than Carlsberg, captain Steven Gerrard managed to inspire the team to play like the bench he was sitting on, and was so inspiring that most of the players on the pitch played like a kaki bangku in a kampung football paddy field.

In fact, the game was so exciting overall that I can't even find anymore words to describe it. So I shan't.

In other news, Steve Mclaren made an impressive debut as manager of Twente, continuing his fine England managerial form by losing only 2-0 to Arsenal even without using his umbrella.
Posted by Unknown at 11:57 am