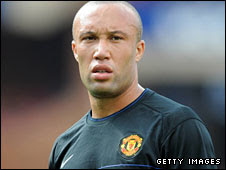 NOWHERE NEAR DUBAI: Gooner manager Arse Wanker added yet another valuable antique to his burgeoning collection of vintage antique defenders last night when Mikael "I'm French" Silvestre joined them for a handsome price of 750000 Monopoly dollars from Team MUSA.

Contrary to reports that he only collects mint, virgin under-20-year-old players, Wenger has also shown a keen eye for vintage classic over-30 pieces as well, as Silvestre joins former Chelski player William "Captain Crybaby" Gallas, at the Emirates Airport. Rumour is, they have already booked adjoining beds at the Gooner's treatment room, and are looking forward to some quality Frenching time together there in the near future.

Rumours that Wenger has his eyes set next on highly-valued (by Rafa, that is) Liverpool antique Grampa Hyypia were unfounded at press time, despite much hoping from Liverpool supporters.

In other news, the national English pub side drew 2-2 with a team ranked eighth in the world, the Czech Republic; a remarkable achievement for the pub side, considering they had Emile Heskey in the squad.
Posted by Unknown at 9:26 am