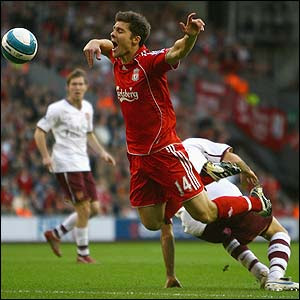 LIVERPOOL: An accord was struck between the only undefeated teams left in the EPL as The Rotating Red Robbers generously gave the Arsenal MSSM team an equaliser 10 minutes from time, just so that EPL fans didn't have to endure the annoyance of having Fugly Strikeforce United on top of the table for an entire week.

After letting in a Steven Gerrard freekick, Arsenal was very angry with Liverpool's goalposts, and even tried to break it by whacking it with the ball, but in the end, the Robin Hood Reds decided to take pity on the kids, and NOT be the ones to teach them how to lose by giving Adik Fabregas a goal. Even then, the kids were still angry at the post, and Adik Fab-bagus tried to break it again with another shot.

Adik Fabregas later gave an interview in perfect English, saying how disappointed they wre not to win, and Jamie Carragher tried to say the same thing in a later interview but ended up talking in some foreign language instead.

In other news, Tottenhamsup lost 2-1 at home to Blackburnt despite not having Martin Jol around to screw up their tactics and despite Shebby Singh being on duty on ESPN's show. Meanwhile, Sven Goran Erikson repaid Frank Lampard for kissing his ass when he was England manager by letting them win 6-0 against his club Svan City. Rumours that Joe Cole and Ashley Cole tried to double team Sven to get in on the action later were unfounded.
Posted by Unknown at 1:59 am