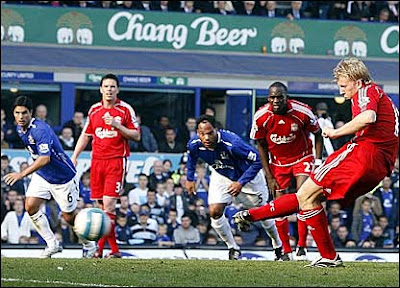 LIVERPOOL: The Toffee Suckers' returned home after the international break to find that their Godison Park home was robbed of three points by hubcap-stealing criminal organisation the Rotating Reds.

The Red Robbers managed to come back from two red cards down to and eventually won by two goals to one despite scoring all three goals; all thanks to two penalties generously given to Dirk Kuyt.

The robbery is suspected to be an inside job, which the Rotating Reds pulled off with the help of a certain man in black. The crime nearly wasn't committed as one of the Rotating Red's members, Sami Hyypia (probably the only player in red who felt guilty for needing to win), scored one for his concience by giving a goal to Everton.

However, deep into injury time, former Men.United player Phil Neville decided to spend some quality alone time with Ol' Tony Hibbert in the showers before the rest of the guys came in; chalking up another red card for Everton by following in his big brothers' footsteps and play a spot of volleyball with Levia's shot on the goalline.

Rumours that the police of Liverpool are now on a manhunt for the Rotating Reds' accomplice from inside - a man wearing black called Mark Clattenburg, who not only let Liverpool in with the two penalties, but also robbed Everton of some penalties at the same time - were unconfirmed at press time.
Posted by Unknown at 9:54 pm