EXCLUSIVE: SHOCKING pictures from the Madjeski!!

READING: For those of you not in the know, Reading played Derby last weekend and won 1-0. Ordinarily, us folks at HBBN wouldn't really give a shit about the game and the result, choosing instead to mock Misses Robinson and Pretty Boy Scouse. However, we feel it our social responsibility to highlight the following disturbing chain of events at the Madjeski Stadium on Sunday.

The mayhem starts with Kevin Doyle lining up a shot (or a header). To be honest, we didn't really give a shit about this game and didn't even bother reading the match report or watching the match highlights.

What we do know is that Kevin Doyle did score and the Rams (or Sheep) were set to lose another game.


Personally, we don't really understand why people even bother to celebrate when they score against Derby County, when even the crisis club, You'll -Never-Win-Again FC managed 6 goals against them. That should really give you an idea of how crap Derby are. Nonetheless, Kevin Doyle scores a goal, wheels away to celebrate and decides he needs a score...


Enter Kingsley the Lion and Stephen 'head-breaker' Hunt. Never mind that kids are watching and cameras are clicking away, the furverts from Reading indulge in a little furry fandom fetish. 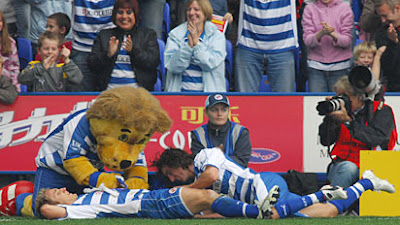 In comes Dave Kitson, for reasons unknown, other than to urge Stephen Hunt on. To, er...suck it, we think. What the Lion is doing, we have no idea since we don't get our jollies off that way, but Kevin Doyle seemed to be enjoying himself as was the young Reading fan in the background. 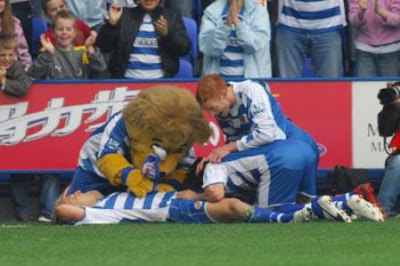 We do, however know that Dave Kitson was later photographed by paparazzi leaving the pitch without his pants. 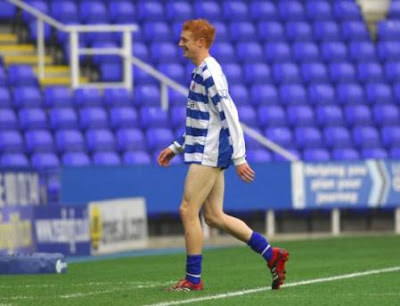 Regretfully, we are unable to tell you when that happened or how it happened (because we weren't bothered to watch the game, see) but certainly this is the most disturbing news to shock the footballing world since Djibril Cisse told us that Steven Gerrard sometimes wore his leopard print underwear in the Liverpool dressing room.
Posted by vincent at 11:08 pm