Chelsea seem to be having a small problem in central defence - we'll only have one central defender available for the match on Saturday. Captain JT is still injured, and Khalid the Cannibal is suspended.

So, in the spirit of Shebby "If I Were Sir Alex" Singh, I'm going to pretend that I'm Jose Mourinho and solve this problem. It's simple really. We play 3-5-2 against Fulham. 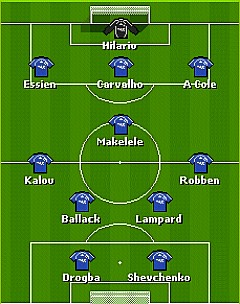 Ricky Carvalho and Ashley Cole to be joined by Michael Essien in defence, since Essien's best position is rightback. Makalele to anchor the midfield, with Ballack and Lampard running things in the middle. Robben and Kalou on the flanks, with Sheva and Drog-ba-ba-boom! upfront.

Geremi can come in after the halftime break if Sheva continues to struggle, which means that Essien will then be able to push up into midfield and we can go to a 3-4-3 setup for the second half.

Assuming we have the match wrapped up, Obi-Jon can come on for Uncle Maka during the last few minutes. Didigol will then drop to central defence, leaving Robben and Kalou upfront in a more conventional 4-4-2 formation.

Works quite well in theory, no?. IF I were Jose Mourinho.

What I wanted for X'mas was my very own telestrator. What I got was a bottle of white, a photo frame and a BJ with teeth. Blargh.
Posted by Unknown at 2:55 pm