President of East of Anfield:
Right. Being a good Catholic, I woke up early this Sunday morning to meet GOD.

President of EoA:
So, who has any questions for Robbie then? 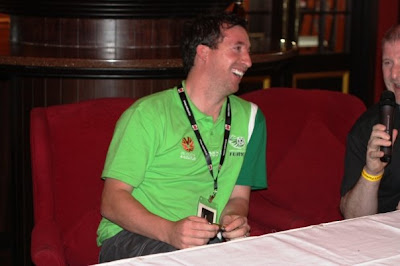 Fan 1: So Robbie, about that penalty, what actually happened?
RF: *laughs* Well, Seaman was bigger than me...

Fan 2: Are you here to buy properties, Robbie?
RF: *laughs*

Fan 4: Who's the most dangerous player you've played against?
RF: *thinks* Gary Pallister and Steve Bruce 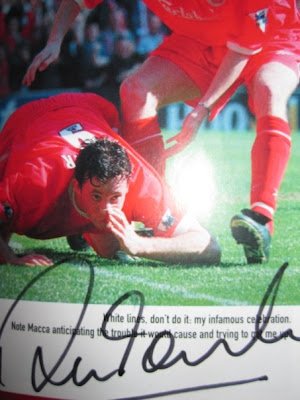 A page from my copy of his book that Robbie signed
Fan 6: Who's your best manager?
RF: I have to say Roy Evans

Fan 7: Who's the stupidest player then?
RF: *laughs* Jason Macateer. I mean, he's a lovely bloke and all, but really, really thick. 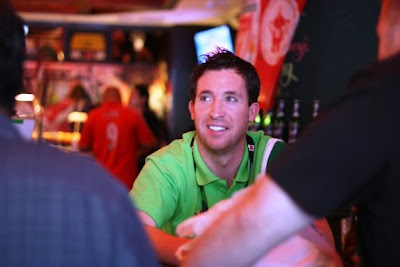 Fan 8: If you were a Manager, would you buy Ronaldo?
RF: *answer drowned by laughs and cries of 'poofter/brown arse etc' by the crowd*
(Ed: All I heard was "...plays for Manchester United.")

Fan 10: What would you teach your son about football?
RF: That it's football and not soccer

Fan 11: How do you feel about the MU - Barca result?
RF: *deadpan* DEVASTATED.


*laughter and hooting, followed by impromtu singing : One Robbie Fowler, followed by Fields of Anfield Road. 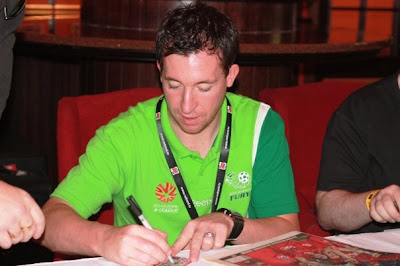 p/s: No one asked about Samir Nasri.
p/ss: There were more questions but my memory failed me. Wish I'd taped the session. 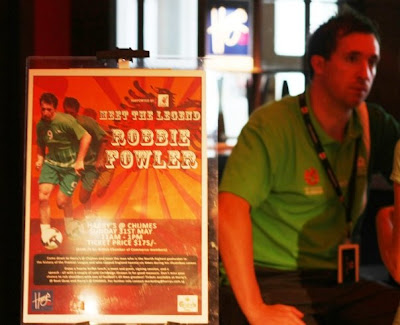 Brunch with Fowler was a very low key event. I was very surprised to approach the bar and not see any banners/posters. I suppose they only wanted real fans and not glory hunters/SPGs etc.

Robbie himself entered the bar without any aplomb. There was no announcement, no entourage, no reporters, no photographers. Most of the fans who were reminiscing about Robbie while drinking their free-flow Carlsberg didn't even realise Robbie was in the house. Luckily, I was kancheong and kiasu enough to hang around near the door waiting for Robbie to make his appearance. Heh.

The camaraderie was great. Everyone there were true Robbie fans. Very good-natured yet not rowdy crowd.

Someone even brought old issues of Liverpool Echo from season 2000/01 for Robbie to sign! No one hogged Robbie. No one jumped queue during the Signing Session. In fact, those who brought more than a few items to be signed split their sessions so others could have a go while he's still fresh. And those who brought marker fans were happy enough to lose it cause someone else would just lend them theirs.

I was hanging out with 3 college-aged kids who surprisingly know as much about Robbie and LFC as the older fans.

About Robbie:
Robbie was wearing the North Fury green jersey ( a few shades lighter than his deep-green eyes) and one of them shorts that reaches below the knee. 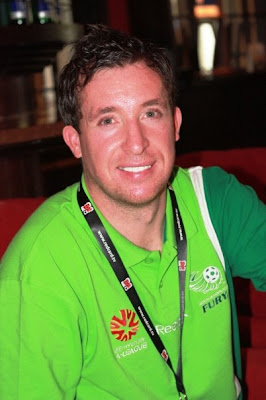 He was ever so nice and quietly funny. No traces of the cheeky lad he once was. Only a pleasant, humble and rather quiet (shy) guy who seems rather touched that his fans still love him. I've only seen Robbie Fowler live once, when they came down to Singapore in 2001 (?), even then from afar. He is much better looking than he is on telly. And while he was never a Carragher, his accent has toned down some too.

About Robbie and I

I was like a dog with six lamp posts. Heh! Anyway, I was one of the first few who approached him within 10 min of his arrival. He pronounces my name (which I had thoughfully pencilled in in his autobiography :p) the English way and said, 'like the song,' and asked if it's the correct spelling. 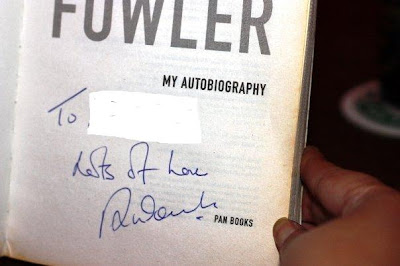