Yanks out, Yank in 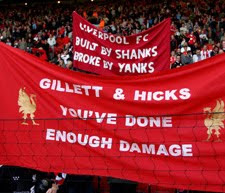 The board of Liverpool has agreed to sell the club to the US owners of the Boston Red Sox baseball team following an extraordinary boardroom wrangle that revealed the splits at the highest level of one of English football's most celebrated insitutions.

WTF, from two Yanks to another Yank? Sigh....

OK, let's look at this another way. Will this New England Sports Ventures thing wipe out the debt that Gillette and Hicks incurred? If so, that's already a positive sign. But whether or not NESV has the funds to invest in the team further is another matter. But at least there's no more pressure on the finances (well, not as much anyway) and we won't be forced to sell stars like Torres at a cut-price just because we need the money.

Though I'm still not convinced that Roy Hodgson is the manager to bring us forward.
Posted by Unknown at 4:01 pm

another americans coming in, not sure if its a good thing, but surly anything but gilett&hicks will do for the Liverpool fans now.

No details yet, but I don't believe that the debt will be wiped out. The debt will probably just be transferred over to the new owners, which makes perfect sense as a business deal.

What you want is a sugardaddy deal like Chelsea or ManCity.

The perfect analogy here is that you are getting rid of UMNO and bringing in PKR.

actually, the deal is for the 200 mil to be wiped clean.

I believe Hicks and Gillett said the same thing when they took over...