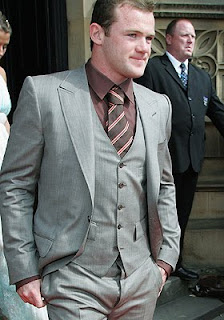 Rooney doubles his money as he performs United U-turn

After seeming certain to leave, Wayne Rooney has signed a new five-year contract at Man Utd worth £180,000-a-week

Wang Rooney?
Wayne Money?
Do you REALLY think it was loyalty that convinced him to stay?
180,000 reasons say otherwise.
Posted by Unknown at 11:45 pm

Nampak je jantan, perangai macam attention ho yang pretend nak break up so she can get a wedding ring.

nothing wrong with wanting more money from ur company if u know they can pay. after all it's their job, not just mere hobby.

agree with ky. nothing wrong with wanting more from the club. but the handling of the situation could and should have been done better. the damage is done. not sure if the fans and teammates can forgive rooney. time will tell.

yea.. nothing wrong . He play hard for the team , why not he ask more ,if his company can pay more.

Now he is value and useful for the team . so he should make more as possible . Once he not useful and old ....the team will said bye bey to him ....

Man that is so much. Who right now is the most paid player.