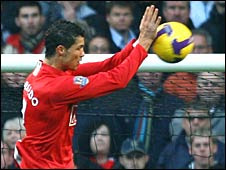 MANCHESTER: In a game that no one else is interested in besides people in Manchester and kids drinking green fanta, the Manchester derby was won by the Men.United team, despite having Doi Doi Ronaldo sent off for trying to Ultraman the ball into the goal.

In other news, Invinsible Ruski footy team Chelski lost their er... TWO-game unbeaten EPL streak to the Arsenal No-One-Between 23-30 team on Sunday, as Robbing Van Persie robbed Chelski of all the points with a wonderful offside goal.

Over in the other part of London, Lotsofham Hotsoup went down to an Everton team who are so poor that Piennar had to share jerseys with Leon Osman. And another london club, Fulofham continued their quest to become the first team to survive relegation without scoring or letting in a single goal throughout the season.
Posted by Unknown at 1:10 pm